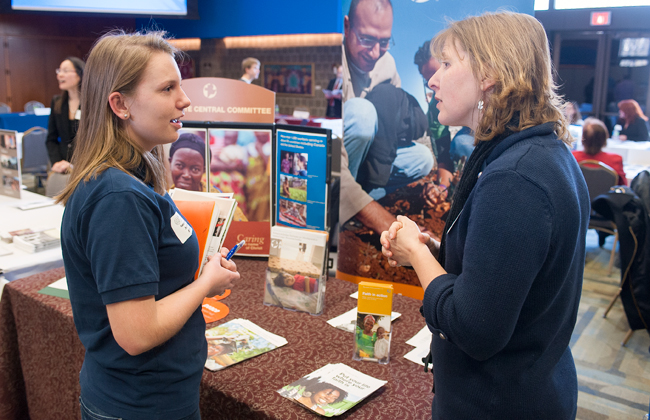 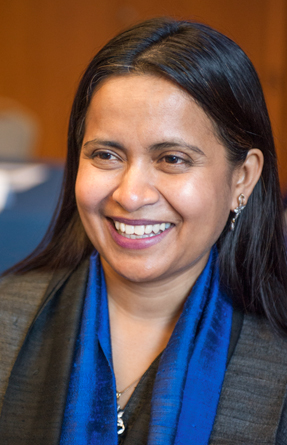 Four years ago eastern Africa’s most prosperous region was facing a famine in the making. The cassava plant, whose potato-like roots form the staple diet for millions in the Great Lakes region of Kenya, Tanzania and Uganda, was under attack by a blight exacerbated by drought conditions.

Catholic Relief Services began addressing the problem with one of its strongest assets, Chandreyee Banerjee, a young Indian woman working for CRS in Kenya.

She organized researchers, local community partners, advocates and even information technology experts to implement solutions to the blight and enable continued cassava growth and harvesting.

That is the nature of today’s international development work, and it was the focus of a Global Development Day hosted April 2 at Villanova University along with CRS, the U.S. Catholic bishops’ overseas relief and development agency.

More than 160 students of Villanova and Cabrini College learned how to break into the field of global development and poverty relief through presentations by CRS staff and other agencies.

Banerjee joined panelists for an opening presentation with CRS’ Global Director of Health and HIV, Shannon Senefeld, and Sean Moore, who works for a venture philanthropy fund.

Senefeld spoke about how in the 1990s she joined a mission trip to Zambia in Africa and came away with two impressions. One, the prospect of large insects and scorpions in one’s bed was unpleasant. Two, many volunteers’ hearts were in the right place but their work was often ineffective because they stayed only a short time in a country.

“It’s not enough to have good intentions,” she said. “Development is not just charity, it’s a business.”

The immersion of CRS staff into a country for two to three years along with sometimes hundreds of national staff, made up of local residents, helps a director such as Senefeld to understand and address problems such as HIV and AIDS, malaria and other health concerns and organize and mobilize community partners and resources.

Staffers learn intimately about the region’s culture and form lifelong friendships, according to Banerjee.

The panelists agreed on the personal benefits of development work but also told the students that it is a constantly changing sector.

“You should only go into this field if you’re comfortable with change,” Senefeld advised. “Most of us find (change) fun.”

One change she has seen in 13 years with CRS is shifting priorities of the U.S. government, which is a primary funder of health programs in developing countries, along with technological advances such as the video communications service Skype, and new challenges brought about by climate change.

Another change was represented by the presence of Moore, who works for the Acumen Fund, based in New York with global offices. He described the firm’s work as “impact investing” in which it supports sustainable “critical goods and services” aimed at people who earn $2 to $5 a day.

One example of Acumen’s investments was the development of a low-cost, low-energy solar lamp that might cost $8 but would replace the need for kerosene-burning lamps and their bad health effects, as well as circumventing the problem of limited or sporadic public electrical service in many developing regions.

After the panel discussion participants led small-group breakout sessions to give the interested students more detailed information on their respective work.

Other guest speakers led groups through topics such as “humanitarian engineering” specifically dealing with water supply and sanitation projects, plus advocacy to call for policy changes in support of global development.

Students also had opportunities to review information and meet representatives of dozens of global organizations working in poverty relief in developing countries.

Organizers of the Global Development Day pointed out that the impetus for it was the students themselves. Because CRS had formed partnerships with Villanova and Cabrini in 2005 and has offered programs and training of “ambassadors,” or student leaders for CRS, meeting the students’ desire to learn about career opportunities in development was a natural fit.

“What we have seen in our work with universities is one, this strong desire for students to learn more about the role of the Church in these efforts; and two, to see what are the gifts, talents and skills they can bring,” said Maureen McCullough, CRS regional director who coordinates the organization’s activities in the Mid-Atlantic and Northeast region.

“I think there is a strong desire among young people in universities to contribute to the common good. Seeing this as a part of your faith, like (the prophet) Micah calls us to do, ‘to act justly,’ I think that’s what we’re seeing in many of the universities in which we work.”

Students throughout the day were encouraged to identify the work that excited them and then pursue that career, a point that made an impact on attendees.

“I’ve been interested in international development for a long time,” said Andrea Zinn, a Villanova senior marketing and international development major. “Sometimes it’s tough to find the right pathway to go into. I thought the point they made about trying to apply your skills to wherever you can best help people was really inspiring and accurate.”

Hardships of working in developing countries hardly seemed a deterence to Zinn, who said “you can accept them because the work you are doing is worthwhile. That’s part of the reason I want to go into the field because I feel you’ve got an opportunity to work in all these different countries, to learn about those cultures and try to figure out the best way to help people on a grassroots level.”

Zinn’s idealism was shared by her senior classmate Alexandra Andreassen, a sociology major who also has studied abroad at Oxford University in England.

“I’ve taken a lot of classes about global poverty and social development. The things I’ve learned in my classes I just can’t get out of my head,” she said. “I really want to make it a lifelong career. I want to do something because I’ve learned so much about it. I want to make a career out of making change.”

Andreassen, who intends to focus on childhood education, said her Catholic faith teaches her that “helping the poor is really important, you hear about it at Mass all the time. Going out and serving others is really a big part of me.”

Villanova junior Matthew Hencken’s ambitions are not yet so well defined in terms of global poverty relief and development. But the chemical engineering major found a presentation on water and sanitation projects to his liking “but there’s a lot of other things like problem solving” that appealed to him, too.

The main draw of the conference for him was “to get involved and see what engineering projects are going on around the world,” Hencken said.

The interest of students and the ongoing work of CRS and its partners in the development sector inspired a key organizer for the conference.

“It’s so important because students need something to believe in and CRS, I think, represents the very best of the Church,” said Suzanne Toton of Villanova’s Office of Mission and Ministry in the College of Liberal Arts and Sciences, which was a sponsor along with the Center for Global and Public Health in the College of Nursing, the Villanova Career Center, the University Partnership with CRS and the Center for Global Leadership in the Villanova School of Business.

“Being exposed over the years to the partnership, seeing lay people who have expertise in agriculture, in trauma, in health, there are opportunities to use your education and your skills to address these cases of suffering and reduce the needless misery and needless death,” Toton said.

“Here are people who are living what they believe and are concretizing those principles of Catholic social teaching — solidarity, the option for the poor, subsidiarity.”

The conference is not the only engagement of CRS with campus life, according to McCullough, the regional director.

“We just trained 27 students at Neumann University, we trained student ambassadors at La Salle,” she said of the Catholic universities. “We’ve had a number of universities assisting us during Lent, lifting up CRS Rice Bowl. It’s really exciting.” 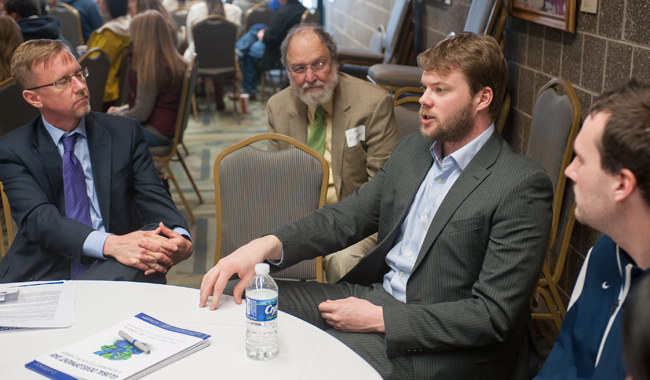