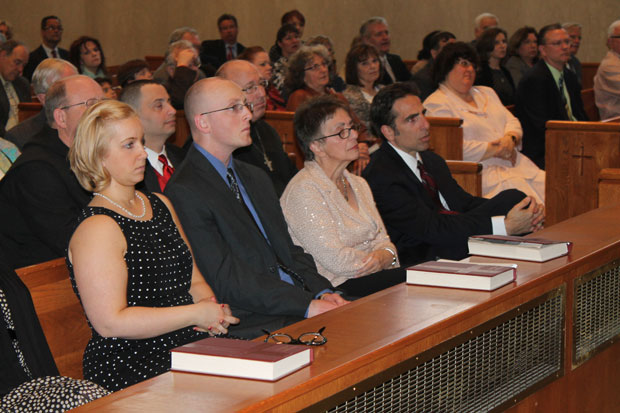 Pictured from left are Nicole and Brendan Flynn, friends of Terri Schiavo's family; Mary Schindler, the mother of Schiavo; and Bobby Schindler, her brother. (Lou Baldwin)

The battle for the life of Terri Schindler Schiavo ended March 31, 2005 through death by denial of nutrition and hydration in a Florida hospice. She had been in a coma for more than 15 years after collapsing in her home.

Her life was ultimately terminated at the request of her husband but against the wishes of her family. The battle to ensure other such comatose patients are not starved to death is ongoing.

On April 5, at the request of her birth family, a Mass in her memory was celebrated by Archbishop Charles Chaput in the chapel of the Cathedral Basilica of SS. Peter and Paul in Philadelphia.

In his homily, Archbishop Chaput stressed healing and how all healing comes from Jesus Christ.

Quoting from the Easter Season texts, he spoke of how the apostles were healed in extraordinary times through initial appearances to them after the resurrection in the Upper Room, when they were convinced he was dead.

But this was followed by continued healing in very ordinary times – the text of the day spoke of the later appearance of Jesus to Peter and his companions as they fished in Galilee.

When Terri died years ago, “that was extraordinary time,” he said. “Now it is ordinary time. You never get used to losing a daughter or a sister; it is always part of your life. I’m sure the emotion isn’t the same as it was many years ago. Neither is the notoriety.” 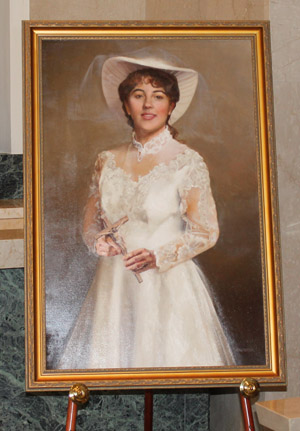 Sometimes it does appear we are not making progress, but Archbishop Chaput reminded the congregation “at the end of the story, Jesus has risen from the dead and we can say ‘rejoice and be glad.’ We can have confidence in the future because of Jesus Christ’s death and resurrection.”

The Mass and a dinner that followed were held in Philadelphia because the Schindler family, which was originally from this area, has relocated their Terri Schiavo Life and Hope Network to Philadelphia.

“The Mass was just beautiful,” said Bobby Schindler, Terri’s brother and spokesman for the family and foundation. “We have so much high regard for his Excellency and we appreciate his celebrating Mass for our sister. We are thankful for all of our supporters here today.”

Some supporters did come a distance. Father Frank Pavone, the national director of Priests for Life who preached at Terri Schiavo’s funeral Mass, proclaimed the Gospel at the April 5 Mass.

Franciscan Brother Paul O’Donnell, who was a spiritual director for the family during Terri’s ordeal, was in from St. Paul, Minnesota.

“This Mass was a great tribute to her and others like her,” Brother Paul said.

“She left a great legacy.”

Karen Bonfiglio, who never knew Terri in life but supported the cause, came in from the Pittsburgh area.

“When I think of what Terri went through I’m just touched,” she said. “How horribly immune our culture has become in the way she and her family were treated. I keep her in my prayers.”

There was also a large contingent of Philadelphia-area residents at the Mass, including Dr. George Isajiw, a past president of the Catholic Medical Association of Philadelphia, an organization that consistently supports a respect for life at all stages.

“This was a landmark case of legalized euthanasia,” Dr. Isajiw said. “It was Roe v. Wade at the other end of life done by a process of omission. It is now legal to euthanize by not giving food or hydration even if the person is not terminal. It goes on in hospitals all the time. It is necessary to have rehab centers where people like this can be treated, and how Terri should have been treated.”