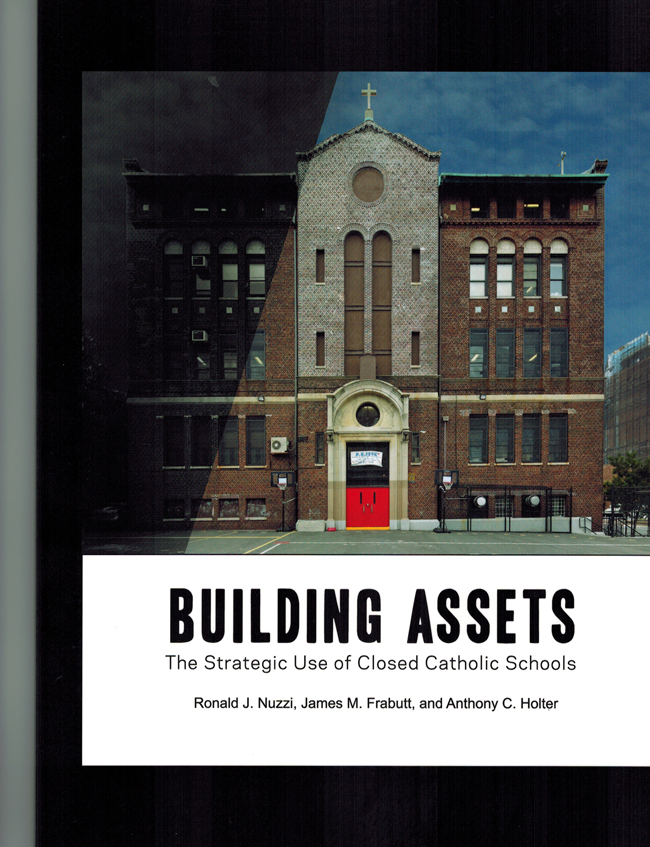 The cover of "Building Assets," a new study on the use of closed Catholic schools by an organization at Notre Dame University.

As they say, when life deals you lemons you make lemonade.

All over America Catholic school systems are imploding, especially because of rising costs but also in many cases the rise of free charter schools.

What do you do with all those empty school buildings? If you do nothing they are an expensive liability to hold.

The Alliance for Catholic Education at Notre Dame University has just released a study titled “Building Assets: The Strategic Use of Closed Catholic Schools.”

The Alliance examined nine dioceses and archdioceses that had experienced a total of 1,047 school closings — Brooklyn, Buffalo, Cleveland, Louisville, Milwaukee, Newark, Philadelphia and Springfield, Mass., and an unnamed diocese that did not complete the study.

“Caring for closed Catholic schools is one way that contemporary Church leaders and diocesan officials can help advance the spiritual mission of the Church by increased attention to the resources these closed buildings represent.”

Philadelphia, which had one of the largest Catholic school systems in the country, had the most closures in the studied group, 187, but it only reported on 83 of them. There were five converted to church use, 28 leased, 39 sold, 10 vacant and one razed.

In South Philadelphia, the former Our Lady of Mount Carmel School is now St. Monica Manor, an archdiocesan nursing home, with the gym beautifully transformed into a chapel.

An interesting aside: the long central corridor, which was lined with student lockers, still is. The builders simply covered the lockers over with new walls. One hopes the lockers were empty and there are no old gym socks fermenting back behind the walls.

Nativity of the Blessed Virgin Mary School in Port Richmond is also in the process of conversion to senior housing. In other instances former Philadelphia Catholic schools now house people with disabilities.

In Milwaukee, the House of the Good Shepherd School is now an administration building for Wisconsin Lutheran College. Hmong American Academy occupies the space of St. Lawrence Church and School in Milwaukee. Another Milwaukee school is now a butcher shop.

In the town of St. Mary, Kentucky, a former Catholic school building now houses a juvenile correctional facility. The Diocese of Buffalo temporarily rented a number of schools to the Buffalo Public Schools.

Of all the uses that are applied to former Catholic schools, conversion into charter schools causes the most contention. Independent charter schools are publicly funded just like regular public schools but have some similarities to private schools.

There is a fear that the charter school will siphon off pupils from surrounding parish or diocesan schools. This does not appear to be a problem if the building is sold or leased to the public school system.

“As free alternatives to public schools, charter schools can constitute a serious threat to Catholic schools, especially in the urban core,” the study states. But as in other instances there is no uniform nationwide policy to address the program.

Of the dioceses sampled, only Detroit and Brooklyn have set written policies for the sale or lease of school property. In Brooklyn 40 percent of the rental income in a charter lease is shared with Catholic schools and academies in the area. In Detroit a similar agreement sees 15 percent going to the archdiocese for distribution to special projects of Catholic schools in existence.

Whatever the policy of the individual dioceses regarding closed schools, “the Church’s spiritual mission and goals can best be realized when adequately supported by her resources,” the study states. “Caring for closed Catholic schools is one way that contemporary Church leaders and diocesan officials can help advance the spiritual mission of the Church by increased attention to the resources these closed buildings represent.”

Overall in the sale or lease of buildings, the study advocates such practices as uniform policies, consultation with all parties that may be affected and assurance there will be no conflict with Church teachings and practice.

For more information see the website of the Alliance for Catholic Education Press.