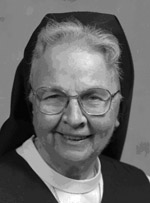 Born in Wilmington, Del.,  Sister Mary Alice entered the Congregation of the Sisters, Servants of the Immaculate Heart of Mary in 1937 from Transfiguration Parish, Philadelphia, and professed her first vows in 1940.  She received her Bachelor of Music degree from the Philadelphia Conservatory of Music and a Master of Arts from Villanova University.

Sister Mary Alice taught in the elementary and secondary schools of the Archdiocese of Philadelphia. She was an accomplished violinist who taught music in the several high schools in the Archdiocese.  She was a member of the first faculty of St. Maria Goretti where she served for seven years in the Music Department. She also taught music at Little Flower High School for seven years.  She was principal and/or vice principal in St. Dominic, St. Cecilia, Coastesville and Villa Maria Academy, Immaculata.  In 2002 she was assigned to Camilla Hall where her ministry was the Apostolate of Prayer.

The funeral Mass was celebrated at Camilla Hall on April 18.  Father William Dean was the celebrant and Father Michael J. Gerlach the homilist.  Interment followed in the Immaculata Cemetery.

In addition to the members of her religious community, Sister Mary Alice is survived by cousins.  She was predeceased by her parents, James E. and Kathryn Martin Monihan, her brothers, Reverend Joseph Monihan, Martin and James Monihan and a sister, Mary Alice Monihan.