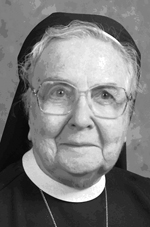 Sister Mary Arthur Hoagland, I.H.M., formerly Lucille Hoagland, died April 12 in Camilla Hall, Immaculata, in the 78th year of her religious life, the day before she was to have celebrated her 75th anniversary of religious profession. She was 97 years old.

Born inNew York City, Sister Mary Arthur entered the Congregation of the Sisters, Servants of the Immaculate Heart of Mary in 1935 from St. Thomas of Villanova Parish, and professed her first vows in 1938. She received her Bachelor of Arts fromImmacualtaUniversityand Master of Arts in Library Science fromMarywoodUniversityinScranton.

Sister Mary Arthur taught or served as librarian in the following schools in the Archdiocese of Philadelphia: St. Gabriel, Transfiguration, St. Matthew, St. Edmond, St. Alice, Bishop McDevitt, West Catholic Girls and Boys, Cardinal Dougherty and Bishop Shanahan.  Sister Mary Arthur served as Director of Library Services in the Office of Catholic Education from 1966 to 1985. For many years she was actively involved in the Catholic Library Association (CLA) on both a diocesan and national level.

In 1997 Sister Mary Arthur was assigned to Camilla Hall for the library. From 2001 until her death, her ministry there was the apostolate of prayer.

The funeral Mass was celebrated at Camilla Hall, on April 16.  Father James McKelvey was the celebrant and homilist.  Monsignors Richard Skelly and James P. McCoy were concelebrants.

In addition to the members of her religious community, Sister Mary Arthur is survived by her sister, Adelaide Vernon,  nephews, grandnieces and grandnephews.  She was predeceased by her parents, Arthur and Lucy Sullivan Hoagland and her sister, Lorraine Hoagland Miller.