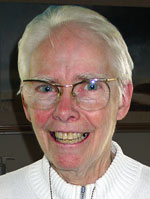 Sister Theresa O’Donnell, who was a Sister of the Holy Child Jesus for 62 years, died of heart failure on Easter Sunday, March 31, at Holy Child Center in Rosemont. She was 84.

Born in Philadelphia, Sister Theresa graduated from West Philadelphia Catholic Girls High School in 1946. She entered the Society of the Holy Child Jesus in 1947, professing her first vows in 1950 and her final vows in 1955.

She also taught in Illinois, California, Oregon and New York, as well as 18 years (1984-2002) at Annunciation School in Washington, D.C.

Sister Theresa was an excellent teacher with a happy disposition that brought out the best in her pupils. She had a zest for life, loving all things Irish, was an avid Phillies’ fan, and an untiring walker.

She is survived by her sister, Kitty McMullan; her brother, Jack O’Donnell; and her religious community.

The funeral Mass was celebrated April 3 in the New Sharon Chapel, Rosemont. Burial followed at Calvary Cemetery in Conshohocken.