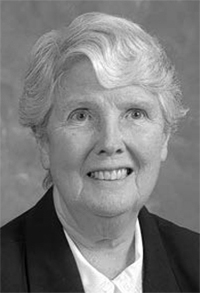 Sister Irene Regina, I.H.M., formerly Irene McConnell, died March 25 in Camilla Hall, Immaculata, after a brief illness. She was in the 59th year of her religious and was 76.

Born in Philadelphia, Sister Irene entered the Congregation of the Sisters, Servants of the Immaculate Heart of Mary in 1954 from St. Athanasius Parish in Philadelphia and professed her first vows in 1957. She received her Bachelor of Arts degree from Immaculata University, a Master of Education from Rutgers University in New Jersey and Master of Science from Villanova University.

Sister Irene taught in elementary schools of the Archdioceses of Philadelphia and Miami and in the Dioceses of Harrisburg, Allentown, Arlington and Raleigh. Until her death Sister Irene was serving as an assistant in the office at St. James School, Falls Church, Va.

The funeral Mass was celebrated April 2 at Camilla Hall, Immaculata. Father William Dean was the celebrant and homilist. Fathers Patrick L. Posey, Augustine M. Tran and Joseph C. Dieckhaus were concelebrants. Deacon James A. Fishenden was present in the sanctuary. Interment followed in the Immaculata Cemetery.

In addition to the members of her religious community, Sister Irene is survived by her sister and brother-in-law, Norma and Edward Ganley; a sister-in-law, Mary McConnell; nieces, nephews, grandnieces and grandnephews. She was predeceased by her parents, Norman J. and Mary Agnes Kerwin McConnell and two brothers, Gerald and James McConnell.