Marriage is not for government to ‘define or redefine,’ says bishop 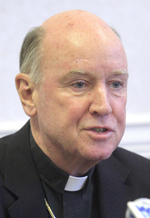 WILMINGTON, Del. (CNS) — Marriage “is a unique relationship between a man and a woman” and it’s not the government’s place to “define or redefine” it, Bishop W. Francis Malooly of Wilmington said in an April 15 letter to Delaware legislators.

The letter was sent four days after Gov. Jack Markell announced a bill to legalize same-sex marriage in the state. In 2011, Delaware legalized civil unions for same-sex couples.

While the government can regulate marriage, Bishop Malooly wrote, it’s “not theirs to define or redefine its essential makeup. It remains God’s design, a permanent union between a man and a woman.”

He said his letter was not written “to attack anyone, but rather to join the current public debate about marriage and to voice once again the God-given meaning and purpose of marriage.”

God created marriage, a unique relationship and loving partnership between a man and a woman, for two purposes: “the good and happiness of the couple and the continuation of the human race,” he wrote.

Bishop Malooly acknowledged the current notion that marriage is “just about love and commitment between two people,” an argument that supports the redefining of marriage to include persons of the same sex.

However, the bishop told lawmakers, while marriage is about love, “it is also about the unique expression of love that only and man and woman as husband and wife can give to each other.”

True marital union, he wrote, “is impossible without the sexual difference. Sexual difference and the capacity to procreate is the very starting point for understanding why it is so important to protect and promote marriage as a union between one man and one woman.”

Marriage isn’t a label “that can be attached to different types of relationships,” the bishop added. Marriage “is best described as a communion,” where, in the words of Scripture, ‘the two become one flesh,'” the bishop wrote.

“No other relationship, no matter how loving or committed, can have this unique capacity to bring about new life. This is why sexual intimacy is reserved for married love.”

Marriage is the only union “that has the capacity to do what God ordered: ‘Be fruitful and multiply.'”

With his April 15 letter, the bishop also sent lawmakers a copy of his February pastoral letter to Catholics on the church’s teachings on marriage. That letter, “Marriage — Gift from God,” is posted on The Dialog’s website, www.thedialog.org.

Ryan is editor of The Dialog, newspaper of the Diocese of Wilmington, Del.

PREVIOUS: From Korean bishops’ president, a ‘Prayer for Peace’