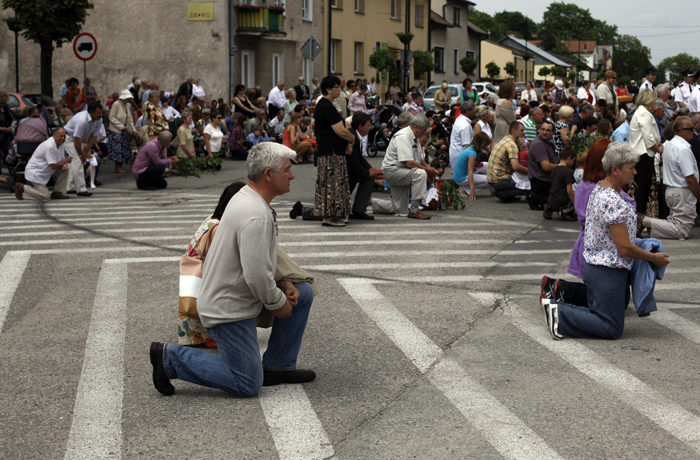 People kneel on the street as they take part in a Corpus Christi procession in Gora Kalwaria, Poland, May 30. A eucharistic procession is a traditional feature of the celebration of the feast of the Body and Blood of Christ, celebrated June 2. (CNS photo/Kacper Pempel, Reuters)

ROME (CNS) — In the Eucharist, Jesus makes himself the food that nourishes and sustains Catholics, even when the road gets rough, Pope Francis said before leading a Corpus Christi procession through the streets of Rome.

Mass and participation in Corpus Christi processions are times for Catholics to reflect on how they follow Jesus and, particularly, what the Eucharist means to them, the pope said at Mass May 30 to celebrate the feast of the Body and Blood of Christ.

(See the full text of the Pope’s homily.)

The pope encouraged Catholics to ask themselves: Is the Eucharist a “moment of true communion with the Lord, but also with my many brothers and sisters who share at this same altar?” and “Adoring Christ truly present in the Eucharist, do I allow myself to be transformed by him?” 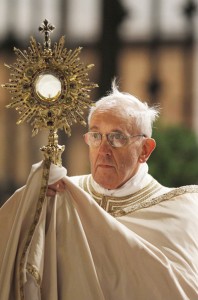 Pope Francis holds a monstrance during the observance of the feast of Corpus Christi at the Basilica of St. Mary Major in Rome May 30. (CNS photo/Paul Haring)

The monstrance with the Blessed Sacrament was carried on the truck that Blessed John Paul II began using in 1994 when he could no longer walk the full mile. Pope Benedict XVI participated in the procession each year, riding in the truck, kneeling before the Eucharist.

“Jesus speaks in the silence of the mystery of the Eucharist and reminds us each time that following him means going out of ourselves and making our lives not something we ‘possess,’ but a gift to him and to others,” Pope Francis said in his homily at Mass.

Focusing his homily on the Gospel of Luke’s account of the multiplication of the loaves and fishes, the pope said gathering around Jesus, listening to his word and being nourished by him transforms the multitude of anonymous individuals into a community of faith where people share who they are and what they have.

The same dynamic should be at work today when Catholics gather at Mass to listen to the Gospel and be nourished by the body and blood of Jesus, he said.

“The Eucharist is the sacrament of the communion that takes us out of our individualism so that together we live our discipleship, our faith in him,” Pope Francis said.

The pope said he is “always struck” by the disciples asking Jesus to send the crowd away to find food and lodging and Jesus telling him, “Give them some food yourselves.”

“In the face of the crowd’s needs, this is the disciples’ solution: Everyone takes care of himself; dismiss the crowd,” the pope said. “Many times we Christians have that same temptation; we don’t take on the needs of others, but dismiss them with a compassionate ‘May God help you’ or a not-so-compassionate ‘Good luck.'”

Jesus’ solution, though, was to ask God’s blessing on the little food available, then to have the disciples share it with crowd, he said.

“It is a moment of profound communion: the crowd quenched by the word of the Lord is now nourished by his bread of life, and all had their fill.”

What Jesus encouraged the disciples to do was an act of “solidarity,” he said, which is nothing other than “placing at God’s disposal what little we have, our humble abilities, because only in sharing and in giving will our lives be fruitful.”

In the Eucharist, the pope said, Catholics experience the “solidarity of God,” a solidarity that can never be exhausted and should never stop causing awe.

“Once again this evening, Jesus gives himself to us in the Eucharist, shares our journey and, in fact, makes himself the food that sustains our lives, even when the road gets rough and obstacles slow our steps,” Pope Francis said.

At the same time, he said, in receiving the Eucharist faithfully “the Lord leads us to follow his path — that of service, sharing and giving; and that little that we have, the little that we are, if shared, becomes a treasure because the power of God, who is love, descends to our poverty and transforms it.”

PREVIOUS: Pope Francis: What have you done to make the church holy, welcoming?

NEXT: Why don’t people bow their heads at Jesus’ name anymore?