Pope Francis: What have you done to make the church holy, welcoming? 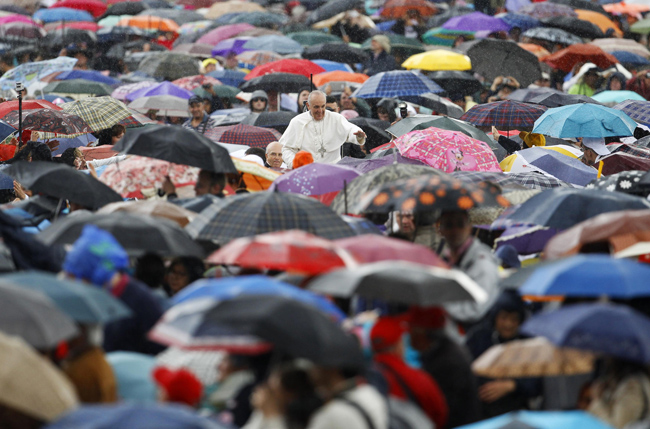 Pope Francis waves amid a sea of umbrellas as he arrives to lead his weekly audience with some 90,000 people in St. Peter’s Square at the Vatican May 29. (CNS photo/Giampiero Sposito, Reuters)

VATICAN CITY (CNS) — All Catholics must ask themselves what they personally have done lately to build up the holiness of the church and ensure people feel welcomed and loved in it, Pope Francis said.

“Some people today say, ‘Christ, yes; the church, no,’ like they say, ‘I believe in God, but not in priests,'” the pope said. Such a position does not make sense because “it is the church that brings us Christ and brings us to God. The church is the great family of God’s children.” 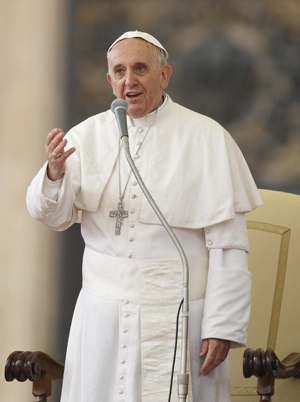 Pope Francis greets pilgrims as he begins his general audience in St. Peter’s Square at the Vatican May 29. (CNS photo/Paul Haring)

During his weekly general audience May 29, an audience that began with the pope getting drenched by a cloudburst as he rode through St. Peter’s Square in an open popemobile, Pope Francis announced he would begin a series of audience talks about the church.

“The church is the great family of children of God,” he said. “Certainly it has human aspects from the members who comprise it, pastors and faithful. They have defects, imperfections, sins. Even the pope has them — and he has many — but what is beautiful is that when we become aware that we are sinners, we find the mercy of God. God always forgives. Don’t forget this. God always forgives.

“Sin is an offense against God, but it’s also an opportunity,” he told the estimated 90,000 people gathered in the square and the avenue beyond. “Humiliation can lead one to see there is something beautiful awaiting you: the mercy of God. Think about this.”

God’s plan, the pope said, is to unite all humanity into one family where everyone recognizes he or she is a child of God and loved by him: “The church is born from God’s desire to call all people into communion with him” and “to participate in his divine life.”

During the Year of Faith, he said, Catholics should pray that their parishes and the entire church would increasingly be a family that lives and shares God’s love and mercy.

Noting that many people today complain about the church, Pope Francis urged Catholics to ask themselves several questions: “How much do I love the church? Do I pray for it? Do I feel part of the church family? What do I do to make the church a community where everyone feels welcomed and understood, everyone feels the mercy and love of God who renews life?”

“The triumphalism of the church stops the church,” the pope said. People become satisfied with everything being “well-organized — all the offices, everything in its place, everything beautiful, efficient.” He urged those at Mass to pray for “a humble church.”

Celebrating Mass with Vatican employees in the Domus Sanctae Marthae where he lives, Pope Francis spoke on May 29 of the danger, even the temptation, for the church and its members of forgetting that salvation comes from the cross of Christ.

“The triumphalism of the church stops the church,” he said. It becomes a church that journeys only halfway to its goal of salvation because people become satisfied with everything being “well-organized — all the offices, everything in its place, everything beautiful, efficient.”

Martyrdom is part of the life and journey of the church, he said, as he urged those at Mass to pray for “a humble church.”

During his morning homily May 25, the pope spoke about the importance of priests, parish workers and parishioners being open and welcoming to those who come to the parish asking for something. He used several examples, including that of a couple who goes to a parish to arrange their wedding, but before being congratulated, are told how much it will cost and asked for their baptismal certificates.

Too many times, the pope said, “we are faith-checkers instead of facilitators of the people’s faith.”

Pope Francis also used the example of an unmarried mother who goes to a parish asking that her baby be baptized only to hear, “No, you aren’t married.”

“This young woman had the courage” to carry her baby to term and not have an abortion, he said, and “what does she find? A closed door. And this happens to a lot of people. This is not good pastoral zeal. This pushes people away from the Lord.”

“Jesus instituted seven sacraments and we, with this kind of attitude, institute an eighth: the sacrament of pastoral control,” he said, using the term in Italian for the customs control at an international airport.

NEXT: Eucharist nourishes, sustains and should transform people, pope says