The importance of urban greening to my generation 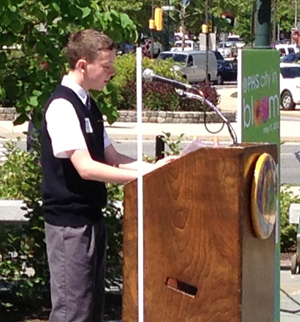 (Note: Liam Leahy, a seventh grade student at St. Francis Xavier School in Philadelphia, delivered the keynote address during the annual “greening project” presentation May 17 on the Benjamin Franklin Parkway in Philadelphia. St. Francis School participates each year in the program to help beautify the parkway area through plantings. Afterward Liam and his classmates planted flowers and trees at the Cathedral Basilica of SS. Peter and Paul and the Sister Cities Park. He shared the stage with local business leaders, Philadelphia Mayor Michael Nutter and Deputy Mayor for Parks and Recreation Michael DiBerardinis.)

Before I was given this assignment, I had never thought about urban greening.  For me, nature was something I took for granted in everyday life.  I would walk in the shade of the trees on hot days, would walk the dog in the park, play at the playground, watch the birds in my grandmother’s garden, and more.  But it was never something I really thought about; it was just there.  And what I did notice was that every spring I suffer from allergies and that left me with little appreciation for the wonders of greenery.  Now, I realize there is much more to plants, grass and trees in the city than that.

Possibly the most important contribution of urban greenery is its effect on the environment.  The trees help by cleaning the air.  They absorb the hazardous gasses and particles such as dust and soot that would otherwise cover the streets.  Trees also help cool down the environment.  Think about it.  On a hot summer day, would you rather walk barefoot on the cement or the grass?  And if you had to walk on the cement, you’d probably want to do so in the shade of the trees.  Trees also capture rain and runoff, thereby stopping floods in the city. 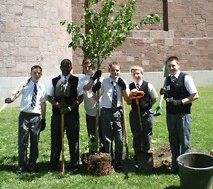 Liam and some of his seventh grade classmates at St. Francis Xavier School plant a tree near the Cathedral Basilica of SS. Peter and Paul.

Another effect of urban greening is that the green environment promotes healthy living.  As an example, running and biking paths, especially with the cherry trees blooming in the spring, encourage people to go outside and exercise.  In some neighborhoods, vacant lots have been converted to community gardens which allow people to work outdoors together and provide healthy fruits and vegetables to eat.  In poor areas of the city this is especially important for people who don’t otherwise have access to healthy food.  Playgrounds and parks give children a place to run outdoors and release energy.  Also, being in a natural environment, rather than just asphalt streets and concrete, soothes the mind and body.

A final reason is that the trees, shrubs and flowers help to beautify an area.  Not only do they make a neighborhood look better, but they also make houses or other buildings seem more attractive.  Therefore, the greening effort increases property values.  Most importantly to my generation, maintaining gardens, window boxes, planters and other landscaping projects promote safer neighborhoods where people eliminate litter and transform vacant lots into places of beauty.  Urban greening also helps to make an area more peaceful to the mind, keeping people calm in a hectic environment.

To conclude, I’d like to say that it surprised me how important urban greening really is to my generation.  Not only is it good for the environment, but also helps with mood, landscaping, recreational activities and more.  Now that I think about how urban greening affects the city, I don’t believe most of my generation would like to live here without it.

PREVIOUS: Finding the gems, if you look beneath the surface

NEXT: Doylestown man reflects on his week visiting, living with Pope Francis in Rome