Doylestown man reflects on his week visiting, living with Pope Francis in Rome

Doylestown, Bucks County, resident Jorge Fernandez meets Pope Francis at the Vatican during a visit with Latino leaders April 7-12. (Photos by L’Osservatore Romano by permission of the author)

I had the incredible blessing of visiting with the Holy Father, Pope Francis, at his residence at the Domus Sanctae Marthae at the Vatican from April 7 to 12 as part of the group of 20 Catholic Latino leaders from America that were invited to this unprecedented occasion with the Holy Father.

I had the honor and blessing to meet Pope John Paul II in Cuba in 1998, which was a life-changing experience for me, and then the blessing of meeting Pope Benedict XVI in Washington, D.C., in 2008 and again in Cuba last March. I knew that sooner or later I would be blessed with the honor of meeting our newly elected Holy Father Pope Francis.

However, never in my wildest imagination would I ever think that the Holy Spirit would introduce me to Pope Francis by allowing me to stay with him at his residence for one week in Rome and to have the blessing and privilege to attend his daily 7 a.m. Mass which he celebrates at the residence chapel and even have breakfast, lunch and dinner with him each day!

He truly is a very engaging man of God, passionate about helping the poor and the needy and one that does not embrace excesses; instead he embraces humility. I had the honor to have several personal conversations with the Holy Father and what struck me each time was how sincere and genuine he is and how happy he is to see you when in his presence.

His passion for the poor is truly contagious and this man of great humility truly will not look favorably on those who ignore the poor and focus on material things for themselves. We were even reminded at the parish level to watch spending millions on our parish buildings that might not need extensive expenditures on renovations when in the end, that sort of money raised could be directed to the poor, the hungry and the helpless … at least part of it. 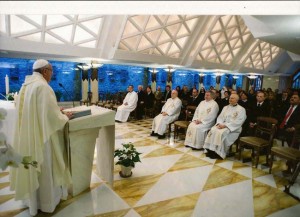 Pope Francis celebrates daily Mass for the CALL group and workers at the Vatican in the chapel of his residence, the Domus Sanctae Marthae.

When Pope Francis recently gave his message to politicians and leaders to put an end to the “cult of money” and to do more to help the poor, he stated, “The Worship of the Golden Calf of old has found a new and heartless image in the cult of money and the dictatorship of an economy which is faceless and lacking any truly human goal.”

Finally he reminded all of us to consider the words of St. John Chrysostom: “Not to share one’s goods with the poor is to rob them.”

Although some of the discussions were private in nature, I can share that one of the conversations we had was about my respectful request for Pope Francis to go to my homeland, Cuba, to keep the positive winds of change brought to the island nation by Pope John Paul II in 1998 and then rekindled by Pope Benedict XVI last year.

Pope Francis, while holding my hand in a very engaging way, looked straight into my eyes and told me, “Si, yo quiero ir a Cuba!” He indeed wants to go to Cuba to be with the people of Cuba! Needless to say I have the wheels in motion with the highest-level people in Cuba and at the Vatican for a possible papal visit to Cuba.

During the week I was further blessed to have my dining room table next to Pope Francis, and at each meal after his blessing he would look over and give me a warm smile and a kind greeting. On several occasions when he was done his meal and would leave before we did, he would walk over, shake my hand and say, “Buenos dias Jorge, thank you for being here and have a blessed day.” Or if a dinner greeting he would ask, “how was your day?”

After breakfast on Wednesday, April 10, Pope Francis walked over to my table and asked if we would be attending his weekly papal audience in front of St. Peter’s Square and of course we said yes. As I sat at the front row seating reserved for us and watched Papa Francisco circle the enormous square filled with over 100,000 faithful in his Popemobile greeting the pilgrims, I turned around to take a picture of this incredible scene. Behind me four rows back was former Speaker of the House Newt Gingrich and his wife Clarisa!

I walked back to greet him since we had met at the Doylestown Moose Lodge a couple of years ago when he was campaigning for president. He remembered our meeting in Doylestown and discussing immigration reform and the Cuban embargo. But the heart of our conversation on that day at the Vatican was on the mutual admiration for this wonderful man of God, Pope Francis.

At the end of his message, Pope Francis left the stage set up in front of St. Peter’s Basilica and before getting on his waiting Popemobile, he took time to greet the visitors closest to him. However, his real joy was evident by his smile when he drove to the crowd on the side, got off the Popemobile and greeted the people warmly, especially the children, the babies and those with disabilities.

This pope is truly “the real deal,” the “People’s Pope,” and one who is welcoming to all God’s children and respectful of other religions and one who believes in leading by example; a true gift to the Catholic Church and the world that as time goes on, I believe, we will see what a true blessing this Holy man is to the world.

Also, I believe he will be a “traveling Pope,” starting with the upcoming World Youth Day in Brazil next month followed by another trip to Latin America next year (and possibly Cuba!) and then hopefully to Philadelphia in June 2015 for World Meeting of Families.

At the end of the stay, on Friday morning as I was finishing my breakfast before going to the Rome airport to leave for Philadelphia, Pope Francis finished before us (he eats like a bird, very little) and after we stood up for his blessing after each meal, he walked over to me as he was leaving the dining room. As he shook my hand to say “Buenos dias,” I reminded him that I was leaving for Philadelphia that day and told him that I was very sad.

“Why are you sad?” he asked me. “Papa Francisco,” I replied, “I have been so happy and honored to live with you for the entire week and now I am going home, but I will miss you terribly.”

This has been an incredible holy journey that will forever be my most memorable, with a personal profound religious impact that only Pope Francis could have made on me. We have been blessed with a great Pope — truly the “people’s pope” — pray for him!

Jorge Fernandez is resident of Doylestown, a Knight of Columbus and a member of Our Lady of Guadalupe Parish, Buckingham. 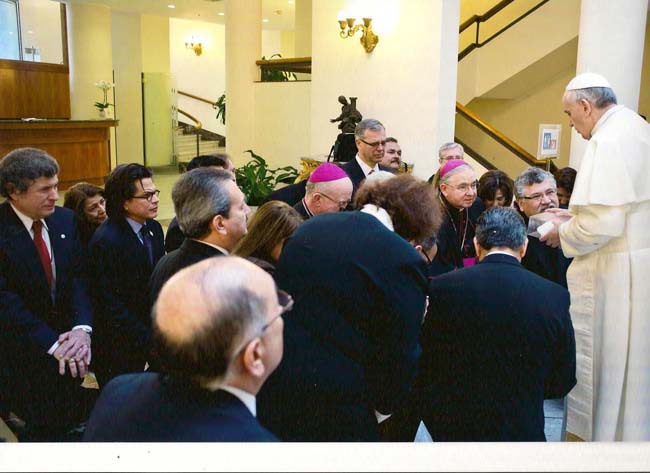 Pope Francis, right, blesses a group of Latino leaders from the United States visiting him at the Vatican April 7-12, including Los Angeles Archbishop Jose Gomez (the archbishop with magenta skull cap nearest to the pope) and Jorge Fernandez at far left. They were representing CALL, the Catholic Association of Latino Leaders, which Archbishop Gomez and Archbishop Charles Chaput serve on the board of directors.

PREVIOUS: The importance of urban greening to my generation

NEXT: Looking forward to a life of graduations