At memorial Mass on his birthday, Bishop McFadden remembered in Cathedral he loved 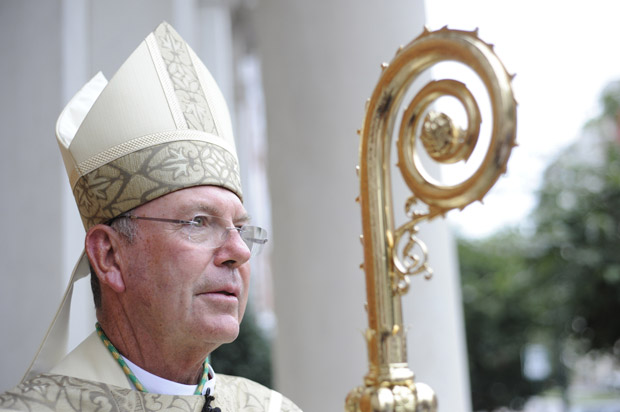 That a recently deceased bishop of another diocese, but originally from Philadelphia, should have a Memorial Mass celebrated in his home town is not unusual.

What was unusual at the memorial Mass celebrated by Archbishop Charles J. Chaput at the Cathedral Basilica of SS. Peter and Paul for Harrisburg Bishop Joseph P. McFadden was the size of the congregation.

Bishop McFadden, who left Philadelphia three years ago to take up his duties as Bishop of Harrisburg, died May 2. The Cathedral was full to its 1,500 seating capacity for this Philadelphia Mass celebrated on May 22, which would have been his 66th birthday.

The homilist for the Mass was Msgr. Daniel Kutys, who graduated from St. Charles Borromeo Seminary just one year ahead of Bishop McFadden.

“Tonight we the Church of Philadelphia gather for our own prayerful tribute to one of our own,” Msgr. Kutys said. “For 63 of his almost 66 years Bishop Joe McFadden was our brother, uncle, cousin, teacher, coach, priest, auxiliary bishop and friend. He has been so much a part of our lives that we had to gather together as a people who have lost an important person.

“As we can all see from the crowd tonight Bishop McFadden touched many lives and made many friends. While he did embrace his people in Harrisburg he also never left his family and friends in Philadelphia behind, and we never lost the place he had for us in his heart and he in ours.”

In a brief eulogy at the close of the Mass, the bishop’s sister, Immaculate Heart Sister Jane McFadden, spoke of the many places he loved – Sea Isle City, N.J., with family; Ireland’s County Donegal with Irish relatives; Harrisburg among his people — but especially the Cathedral where he was ordained both priest and bishop.

She quoted from her brother’s oft-stated beliefs: “We must always be a people of hope. We have a gift that only God can give us and it is the gift of the Holy Spirit. We should never be afraid no matter what befalls us.

“Don’t be afraid because the Lord is always with us. We must be a people of hope because the Holy Spirit always creates anew. That doesn’t mean we are not going to have to embrace the cross. The Lord has said we have to take up our cross each and every day and we must do it with a sense of joy.”

In the procession were many priests whose lives Bishop McFadden had touched and in addition to the often-seen Knights of Columbus honor guard, there were 36 green-jacketed men of the alumni of St. Thomas More High School from which Bishop McFadden graduated in 1965 and which itself closed in 1975.

“We are loyal to the bishop,” said alumni president John Millon. Bishop McFadden was a teacher before entering the seminary and later a principal, and as auxiliary bishop had oversight over the Catholic schools.

Bishop McFadden did not enter St. Charles straight from high school or college; he was a coach and teacher at West Catholic High School for boys prior to entering.

Someone who remembers those days is Rita Schwartz, president of Local 1776, Association of Catholic Teachers.

Others remembered Bishop McFadden for other facets of his life.

John Mullen, founder of Apple Leisure Group, recalled, “I met him when we went over to Rome for the canonization of St. John Neumann. He was secretary to Cardinal John Krol at that time and we have been friends ever since. Every year we played golf just to keep in touch.

“He was very warm, friendly and outgoing and he treated everybody equal. He was as common a person as you could find but yet he was a bishop. Almost everyone called him Joe, but always called him Bishop. He deserved that.”