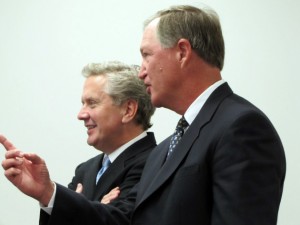 This week the Faith in the Future Foundation received a big boost in its mission to run the Archdiocese of Philadelphia’s 17 Catholic high schools and four schools of special education with a $600,000 grant from the Philadelphia Schools Partnership.

The announcement of the grant May 13 means the foundation, which assumed operational control of the schools last August, can further its mission to increase enrollment and fundraising, develop leadership and enhance academic programming and technology for the schools.

According to a statement by the Philadelphia Schools Partnership, the grant from its Great Schools Fund “will support strategic planning, capacity building and the development of growth strategies for each of the eight (Catholic) city high schools.”

As such, the grant specifically is intended to help Faith in the Future “design the accountability and performance measurement systems required to document this achievement and attract more support for its students.”

The statement indicated that boosting enrollment in the eight Catholic high schools located in Philadelphia was the ultimate goal of the grant. The schools serve “approximately 6,200 students and have the capacity to serve nearly double that amount,” it said.

Since the grant is intended to build “the organization’s central management capabilities,” improvements would help the foundation serve the other nine high archdiocesan high schools outside the city and the special education schools in their goals of raising enrollment.

“We are grateful to PSP for recognizing that Catholic schools are critical to its efforts to increase access to high-quality schooling for all students in Philadelphia,” said Samuel Casey Carter, chief executive officer of Faith in the Future. “Students of diverse backgrounds are graduating from our schools and going on to college, and it is our goal to provide more young people in Philadelphia with this opportunity. We look forward to working with PSP in our shared goal of providing more families the option to attend a great school.”

Carter described the grant as “seed money to help build the initial team” ofexperts for the foundation and to encourage greater investment in it. A precursor to securing future investments is proving to investors the quality of Catholic education by using standard metrics.

“We need to demonstrate the quality of our outcomes with measurements we don’t have today,” he said.

More investment in the Catholic secondary school system would allow for better technology and better academic offerings to students, as well as more scholarship aid to families who want to choose a better school for their children, Carter suggested.

The foundation’s goal of attracting “more families and more investment to the system” is not just for wealthier suburban families or poor ones in the city, but for all.

“It’s when we elevate the quality of outcomes across the system that we can leverage that in the city,” Carter said. For instance, better techology in suburban schools can deliver their Advanced Placement courses to city schools that would otherwise be unavailable.

He hoped that soon the Catholic school system would be “self-sustaining and not dependent on investment, to serve a larger number of children than today.”

Faith in the Future was founded in 2012 on the heels of the archdiocese’s Blue Ribbon Commission on Catholic Education report that called for initiatives to stabilize declining enrollment and boost future  enrollment.

While Carter said currently there are 14,205 students enrolled in all the archdiocesan high schools, “we could double that tomorrow” with available student capacity in the schools.

Through the foundation and state-run programs like the Opportunity Scholarship Tax Credits and the Educational Improvement Tax Credits, “we want to attract more families who can’t afford better schools,” Carter said. “We want to demonstrate the value of our schools and the quality of the educational outcome through data today, and the capacity to serve in the future.”