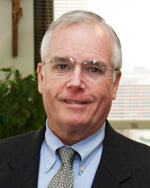 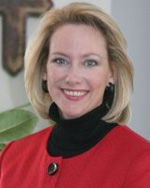 One of the last acts of Pope Benedict XVI before his surprising retirement in February was to bestow papal honors to two Catholics in the Archdiocese of Philadelphia.

Donna Farrell, the former director of communications for the archdiocese and Richard V. McCarron, the former secretary for Catholic education, both received letters dated May 8 from Archbishop Charles Chaput conveying the good news and inviting them to a formal award ceremony during the 6:30 p.m. Mass on Sunday, June 2 at the Cathedral Basilica of SS. Peter and Paul.

Farrell will receive the Cross Pro Ecclesia et Pontifice (for the Church and the Pontiff), consisting of a gold medal inscribed with those words in Latin and an official scroll. Established in 1888, it is given to a Catholic who has shown distinguished service to the Church and to the papacy.

It is the first such honor given to a lay person in the Archdiocese since 2003.

The award “comes directly from the Holy See and is one of the highest honors the Holy Father can bestow on an individual,” Archbishop Chaput said in his letter. “As such, it’s an extraordinary blessing for the whole Catholic community in our region. This award is a testimony to your outstanding service to the Church in communicating her message of Christian hope under very demanding conditions.”

During Farrell’s tenure as the chief spokesperson and communications strategist for the archdiocese, the church was buffetted by numerous serious events, many unprecedented, to which the archbishop referred.

Currently the Manager of External Affairs for Independence Blue Cross in Philadelphia, Farrell became communications director for the archdiocese in 2004, after having worked as broadcast and media specialist in the communications office, and previously as a television news reporter in Scranton, Pa.

Considering only some of the crises she and her staff handled through thousands of statements and countless late nights in each of the nine years of her tenure, her dedication becomes clear: the release of the first Philadelphia grand jury report on clergy sexual abuse in 2005 and implementation of steps to address it; a second report in 2011 and subsequent criminal trial of two priests and suspension of dozens of others; a major Blue Ribbon Commission report on Catholic education and its ongoing implementation; a financial scandal involving the arrest and conviction of a former chief financial officer; waves of parish closures and mergers; a financial crisis resulting in the layoffs of scores of employees and the selling of premier properties to close a multi-million-dollar deficit; the ordination of six auxiliary bishops, the deaths of two cardinals (Cardinals John Foley and Anthony Bevilacqua) and installation of Archbishop Chaput – plus the everyday work of promoting the good works of the Church in social services, education, evangelization and parish life.

“I share this award with a very special group of people,” Farrell said May 16. “It honors the service of everyone who worked and still works in Communications at the Archdiocese. On some days the job seemed overwhelming; on all days, deep down, I realized it was a blessing.”

Farrell termed the years leading to her transition to IBC this year as “an extraordinary time in the history of the Archdiocese, and what an amazing group of people” she worked with during that time.

“When faced with times of great challenge, as our Catholic community was during my time as director of communications, there is a need to remind the community of the enormous good which is being done by the Church,” Farrell said. “And I am proud to have been part of the team of tremendous individuals who made it their mission to remind the community what our Church has always stood for.”

Farrell said she was “deeply grateful” to Archbishop Chaput and to Pope Benedict, who is remembered fondly in the Farrell home.

During Pope Benedict’s visit to the United States in 2008, Farrell assisted the New York Archdiocese with communications during his visit to the city. Her husband Michael was at home in Delaware County with their twin 4-year-old son and daughter, who called the pope “Papa Ben.”

“They’d watch (the papal visit) on TV and say, ‘Mommy is with Papa Ben,’” Farrell said.

The other papal honoree is Richard V. McCarron, who was made a Knight of the Order of St. Gregory in 1998 by Pope John Paul II. Archbishop Chaput informed McCarron that he was advanced to the rank of Knight Commander by Pope Benedict.

In his letter the archbishop said knighthood in the order “is the single highest honor the holy father can bestwo on an individual” for lay people other than Catholic royalty, heads of government or state and senior diplomats or similar international public figures.

“Advancement in the order is a unique form of recognition,” he said. The pope “chose to confer this recognition in gratitude for your continued and exemplary witness to the Catholic faith, and service to the Church and her people.”

As secretary for Catholic education from 2001 to February of this year when he retired, McCarron oversaw the central administration for the 17 archdiocesan high schools and four schools for special education, the centralized functions for parochial schools including curriculum and other educational services, catechetical formation including parish religious education programs, archdiocesan youth and young adult programs and the Newman Apostolate that serves colleges and universities in the archdiocese.

All are invited to the June 2 Mass and conferral of awards celebrated by Archbishop Chaput.