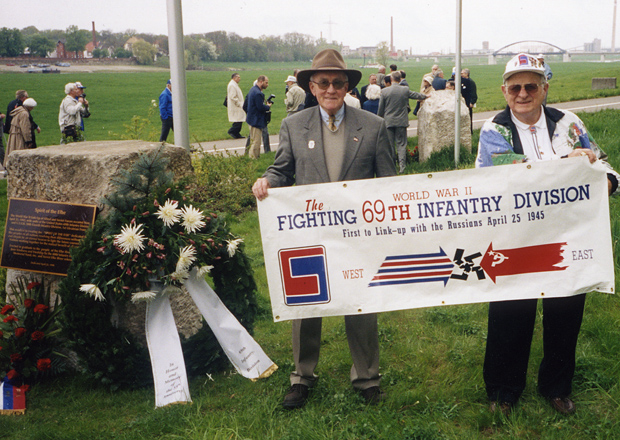 Norbert McGettigan, left, meets with a fellow surviving soldier of the U.S. Army's 69th Division, which fought the German Army at the Elbe River during World War II.

Memorial Day, the date we honor those who fought in our nation’s wars, especially those who died, used to be May 30; now it’s the last Monday of May because people like long weekends, which is kind of sad in a way.

As a nation we’ve fought many wars, some necessary, others questionable. Very few people would deny that World War II, which was the deadliest war in human history, was truly necessary. Decency and civilization itself were in the balance. Most of the men and women who served and survived are now dead and gone, but their stories need to be remembered.

Norbert McGettigan, who had a successful career in the travel business and is now turning 88, was just a kid of 16 at St. Thomas More High School in West Philadelphia, and who grew up in Our Lady of Lourdes Parish, when the Japanese bombed Pearl Harbor.

After his junior year he quit school for a job at the Philadelphia Navy Yard while attending night school. He tried to join the paratroopers, but a hernia that he developed from the heavy lifting at the Yard made him 4F, unsuitable for service.

After he had the hernia fixed he was drafted in late 1944 and sent down to South Carolina for infantry training. After hasty training and two-day leave he reported to New York where the “Grey Ghost,” HMS Queen Mary, took him and about 15,000 other G.I.s to England for further deployment.

To give an idea how crowded the ship was, its pre-war passenger capacity was listed at 2,139. It was so crucial to the war effort that Hitler placed a $250,000 bounty for any U-boat captain who could sink her. Fortunately none did.

They arrived at Southampton where a smaller ship took them to Le Havre, France, where they were immediately shipped in unheated box cars to the battle front at Malmedy, Belgium, in mid-January 1945.

Malmedy had been the site of a German massacre of 84 American POWs the previous month. Actually both sides were guilty of shooting prisoners in situations where they did not have the means to transport prisoners to the rear. 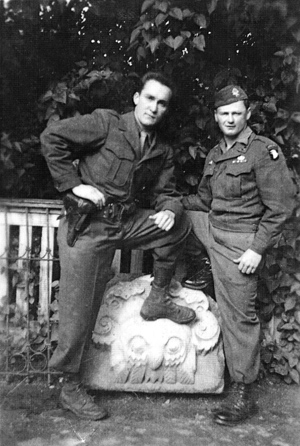 Young Norbert McGettigan at left poses with his brother Manus, a Catholic priest and Army chaplain, in Europe in 1945.

This was at the tail end of the Battle of the Bulge, when Hitler, in a last desperate gamble, threw his army into an offensive, hoping to recapture Le Havre and perhaps gain at least an armistice.

McGettigan’s brother, Captain Manus McGettigan, was a Catholic chaplain with the 101st Airborne Division who was with General Anthony McAuliffe during the successful defense of Bastogne.

Malmedy was close enough to the action that they could hear the sounds of the artillery and the chatter of machine guns.

As McGettigan and a group of about 50 others were waiting to be deployed, a jeep drove up, driven by a Catholic chaplain pulling a trailer with about 30 dead bodies on it. He asked the chaplain if he could hear their confessions. The chaplain at first demurred saying there were many more bodies to recover, but in the end he stood on the hood of the jeep and gave them general absolution, Catholics and Protestants alike.

McGettigan was at first assigned to the 69th Division as a replacement. The division, surprised by the initial assault of the Bulge, had lost many men. Some were killed in action but many more taken as prisoners.

Later he would be assigned to the 106th Division, and fought with them all the way up to the Elbe River, where the American and Russian armies met.

“In combat all night long you would say rosaries to give you courage,” McGettigan remembers. “I was convinced I would be killed, and decided I would be a priest if I lived. I told that to a chaplain and he laughed and told me 100,000 other men said the same thing.”

The Germans, in his opinion, had weaponry far superior to the American equipment; for example they had night sights on their rifles and could catch the Americans unawares.

One day they were in a bunker during an attack, and everyone except himself and another soldier, including their lieutenant, was killed. For two days they had no food, but foraging through the lieutenant’s effects they found a full bottle of Johnny Walker scotch. “I got drunk,” McGettigan said. 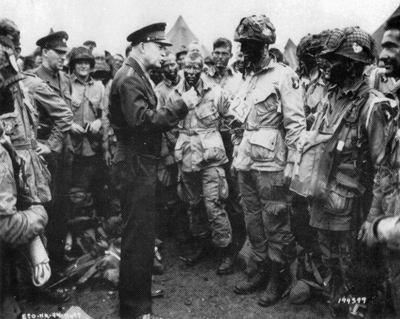 General Dwight Eisenhower meets with soldiers in the European Theater during World War II. Father Manus McGettigan is shown second from the left of Eisenhower.

Eventually medics arrived and called down to them. The problem was the Germans had fluent English speakers whose task was to try to lure Americans out and kill them. McGettigan and his buddy answered the medics with a hail of gunfire. The same thing happened on a second try.

On the third try a medic yelled, “We don’t give a (expletive deleted) if you guys bleed to death. We’re leaving.”

“When he said ‘(expletive deleted)’ we knew they were Americans so we came out,” McGettigan recalls.

Another time he and one other soldier were pinned down by an entire squad of German soldiers. McGettigan had a standard rifle, his companion had a BAR (Browning Automatic Rifle) which was the WW II equivalent to an assault rifle. McGettigan thinks it was not nearly as good as the German equivalent, which used a belt rather than a clip, but in this case might get the job done.

The trouble was his companion fell apart and cried uncontrollably and no matter what McGettigan did he would not stand up and fire the BAR. In desperation McGettigan grabbed the gun himself. “I think I got 10 or 12 of them,” he said.

In combat you either learn fast or you die. He recalls another time he was in a bunker and a “green” – inexperienced — lieutenant stood up and started scanning the front with his binoculars.

“I wouldn’t do that, Lieutenant, they’ll see the reflection off the binoculars,” McGettigan advised. “I know what I’m doing,” the lieutenant snapped, just before a shell took the roof off the bunker.

Other vicious fighting was at Leipzig where the Germans fought to the death, and his unit also participated in the assault on Colditz Castle where 800 American and British airmen were imprisoned. It was the subject of subsequent books and films.

The soldiers killed the surrounding guards but at first they didn’t realize it was a prison camp. Fortunately the prisoners put out American and British flags and they ceased firing.

Landmines, both German and American, were a constant danger. One time they were crossing a field, and their sergeant, who wasn’t especially bright, said, “By the way, don’t step over the rope, it’s a minefield.” McGettigan looked down — his foot was right on the rope. 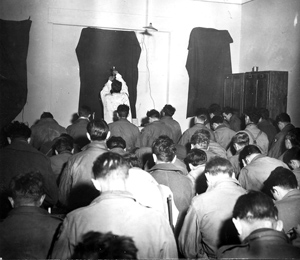 Norbert’s brother, Father Manus McGettigan, celebrates Mass on Christmas Eve, 1944 at a division headquarters building during intense fighting at Bastogne, Belgium, as the city was surrounded by German forces during the Battle of the Bulge.

“The Bouncing Bettys were the worst,” he said. The way these particular mines were constructed, he explained, when they were stepped on they would shoot up like a rocket and spray shrapnel around them. The trick was if someone stepped on one, everyone else had to clear out of the area. When he lifted his foot the shrapnel would spray around but generally not hit the person who stepped on it if he didn’t move.

Although he did receive minor injuries, in the end it was dysentery that took him out of action. Constantly on the road in unsanitary conditions with no chance to change clothes, dysentery was a real problem.

After the war in Europe ended he remained in Germany for more than a year, under the policy that those who arrived first went home first.

However, his four and a half months in hard combat were more than enough to last a lifetime, and 68 years later he hasn’t forgotten a thing. He earned his medals many times over.

PREVIOUS: Old St. Mary Parish at 250 years: Older than the diocese, and U.S.

NEXT: Priest suspended on 40-year-old allegation of sexual abuse