Six women take vows as Little Sisters of the Poor 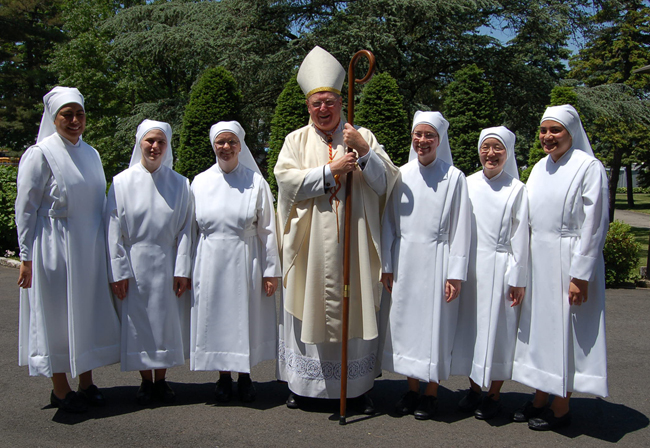 New York Cardinal Timothy Dolan stands with sisters who made their first vows June 1 with the Little Sisters of the Poor, an order of religious women that runs a nursing home in Philadelphia.

Cardinal Timothy M. Dolan of New York presided at the Mass of Religious Profession as six young women made their first vows as Little Sisters of the Poor on June 1 at St. Ann’s Novitiate in Queens Village, N.Y.

The order of sisters operates Holy Family Home for the Aged at 5300 Chester Avenue in West Philadelphia.

Cardinal Dolan was keeping a promise he had made three years earlier to one of them – Sister Elizabeth Mary de la Croix – when he met her in St. Patrick’s Cathedral shortly before her entrance into the congregation.

When he learned she was originally from his home parish in Baldwin, Missouri, and had gone to Holy Infant Grade School just as he did, he vowed to be present if and when she made first vows.

“You are the heartbeat of the Sacred Heart of Jesus!” Cardinal Dolan told the young women in his homily.

He reminded the six novices that they were dedicating themselves to being the heartbeat of Jesus, tenderness incarnate, in treating God’s people: first of all in receiving his love for them, gratefully, humbly, every day – and then in returning that love with tenderness to his people.

That message struck not only the six making their profession, but also the five new novices seated in the front row at Mass, and the many Little Sisters from the various homes for the elderly run by the Little Sisters.

They were there to support Sister Mairéad Regina from Ireland; Sister Malia Cecilia and Sister Malia Makalita from Tonga; Sister Mary Gerard of the Cross from Syracuse, N.Y.; Sister Sharon of the Sacred Heart from Elmhurst, N.Y.; and Sister Elizabeth Mary as they pronounced vows of chastity, poverty, obedience and a special fourth vow, hospitality.

After Mass, the cardinal and those making profession were presented with leis by the families of the sisters from the South Pacific. The newly professed learned their new assignments, which will take them to Little Sisters’ homes for the aged in Dublin, Ireland; Sydney, Australia; Totowa, N.J.; San Francisco and San Pedro, Calif.; and Pittsburgh, Pa.

The Little Sisters of the Poor are an international congregation of women religious founded in 1839 by St. Jeanne Jugan, canonized by Pope Benedict XVI in 2009. Together with a diverse network of collaborators, they serve the elderly poor of over 30 countries.

Sister Mary Richard is responsible for formation at St. Ann’s Novitiate, Queens Village, N.Y. For more information about the Little Sisters of the Poor, visit www.littlesistersofthepoor.org.

NEXT: Parishioners, Missionaries of the Sacred Heart celebrate 100 years of faith in Ottsville