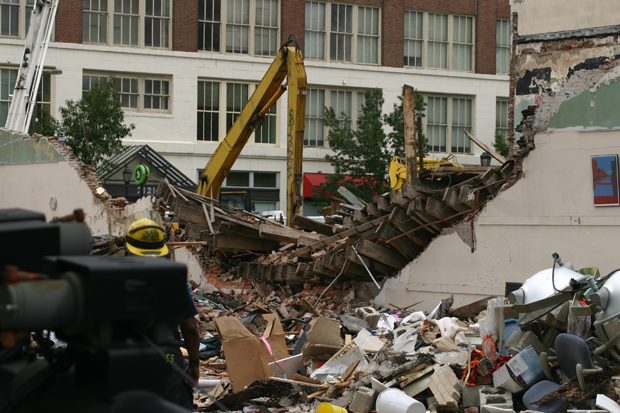 Twisted beams and the rubble from walls of the collapsed buildings are all that remains of the structures, as seen from the rear of the block at 22nd and Market Streets in Philadelphia. (Matthew Gambino)

The collapse of two buildings in center city Philadelphia June 5 that left six people dead and more than a dozen injured drew the attention of Catholic leaders, including those at the Vatican.

Archbishop Vincenzo Paglia, president of the Pontifical Council for the Family, wrote a letter June 6 to Archbishop Charles Chaput expressing sympathy for the victims and pledging prayers.

“We have just heard about the tragic collapse of the four story building and its adjoining Salvation Army Thrift Store, in Market Street, Philadelphia, and of the loss of lives involved, and of the many injured,” Archbishop Paglia wrote.

“In these difficult circumstances for the city, the Pontifical Council for the Family assures you of its closeness and prayers, especially for the victims and their relatives.”

A vacant building at 2136 Market Street was being demolished by a construction crew June 5 when a wall collapsed about 10:30 in the morning. It caused the adjacent four-story building also to partially collapse, trapping shoppers of the Salvation Army store inside.

Five women and one man were killed in the accident. One of the survivors was pulled from the rubble later that night. 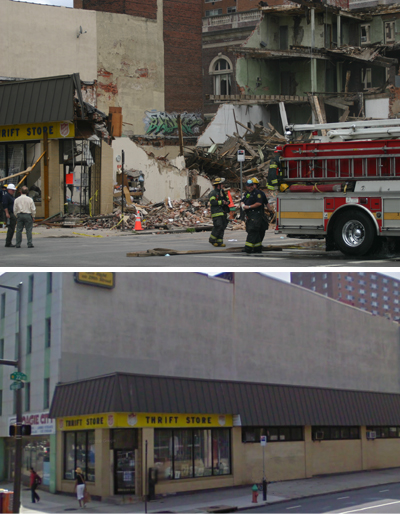 The block at 22nd and Market streets is seen after the collapse at top, and previously, below (image from Google).

Across Market Street from the scene, as workers continued to sift through piles of brick and other debris on Thursday, pedestrians viewed a makeshift memorial leaning on a subway station entrance.

Photographs on the cardboard display identified a young woman, 35-year-old Kimberly J. Finnegan, and confirmed on a Facebook page, as the first identified fatality in the collapse.

Archbishop Chaput posted on his Facebook page a message of consolation late on Wednesday after details of the incident emerged.

“My thoughts and prayers are with those affected by the building collapse at 22nd and Market Streets in Philadelphia this morning,” he wrote.

“Please join me in asking the Lord to watch over all those impacted and to guide the hands of medical staff and rescue workers as they tend to those in need. May the Lord give you peace.”

In addition to rescue workers dispatched to the scene after the accident, passersby swung into action to pull injured people from the scene and assist with clearing debris to reach others.

On Thursday Mayor Michael Nutter vowed an investigation into the collapse of the buildings. City officials planned a press conference in the evening. 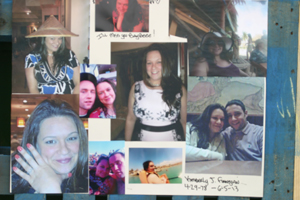 A makeshift memorial stands on the sidewalk across from the accident site, depicting Kimberly J. Finnegan, 35, an apparent fatality from the collapse.

The stretch of Market Street between the office towers of the 1900 block and the transit hub of 30th Street Station has seen a revival in commercial and residential development in recent years. The blocks near the collapsed buildings on Market were the site of a pornographic theater and bookstore, closed and razed in recent months as high-end developers coveted the real estate.

The Holy See’s Council for the Family, led by Archbishop Paglia, is sponsoring the World Meeting of Families in Philadelphia in September 2015. The event is expected to welcome hundreds of thousands of people from around the world to the city, along with a possible visit by Pope Francis.