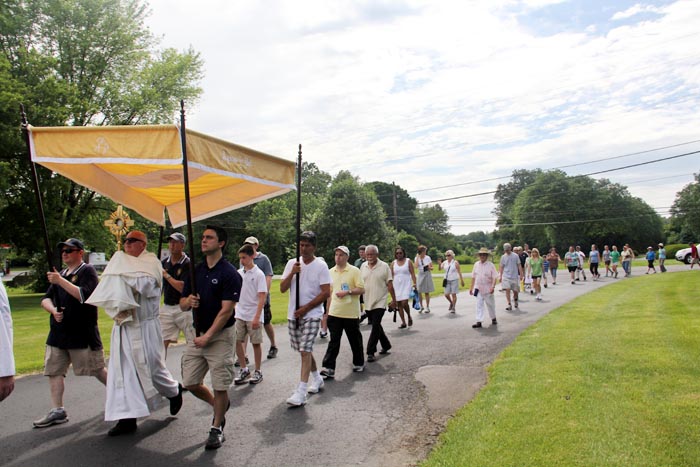 Msgr. Joseph Prior, pastor of St. John the Evangelist Parish in Morrisville, leads the procession from St. Ignatius Church, Yardley, up the driveway of St. John's for the final benediction and conclusion of the Corpus Christi procession. (Photos by Sarah Webb) 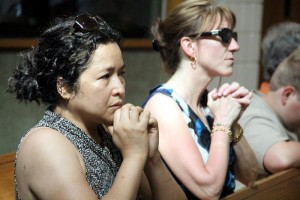 Myrna Abad (left) and Christina Mahan from St. Ignatius Parish, Yardley, pray during benediction at St. John the Evangelist, Morrisville, after processing from their parish.

When St. Ignatius of Antioch Parish, Yardley, and St. John the Evangelist Parish, Morrisville, held their second annual joint Corpus Christi Procession on June 2, they were following a time-honored tradition that one does not usually see in this part of the world.

(See a photo gallery of the procession and benedictions.)

The processions, which celebrate the Eucharist, literally the Body of Christ, had their beginning in 13th century Italy and spread from there. It usually involves a street procession with the Eucharist beginning in one parish and ending in another with a few stops for short devotions along the way.

The procession can also take place entirely within one parish or even just on the parish grounds, but it always ends with Benediction of the Blessed Sacrament.

As a matter of fact the beautiful hymns we associate with Benediction – Pange Lingua, O Salutaris Hostia, Tantum Ergo — were really written for Corpus Christi celebrations by St. Thomas Aquinas.

“It’s a great way to honor our Eucharistic Lord,” said Msgr. Samuel Shoemaker, pastor of St. Ignatius of Antioch Parish in Yardley. “Parishes where I was stationed before were too far apart for this. I think it is a first for Bucks County.”

“I was just moved by the Holy Spirit when I saw the video and wondered why it doesn’t happen here. I thought maybe we could do it in our community,” Kopernowski said.

She took the proposal to Father Bernard Taglianetti who was then stationed at St. Ignatius and suggested a procession to St. Andrew’s in Newtown. “He almost fell off his chair,” she remembers.

Father Taglianetti was right. At approximately eight miles away, it would be more of a hike than a procession.

As a compromise Kopernowski suggested the procession could be to St. John the Evangelist, which at slightly less than three miles was very doable, especially with a bus provided for the elderly and others who could not walk the distance.

Both Msgr. Samuel Shoemaker at St. Ignatius and Msgr. Joseph Prior at St. John the Evangelist thought it a wonderful idea.

“It’s a great way to honor our Eucharistic Lord,” said Msgr. Shoemaker. “Parishes where I was stationed before were too far apart for this. I think it is a first for Bucks County.”

Msgr. Prior is used to processions. When he was rector at St. Charles Borromeo Seminary he organized a procession from Wynnewood to the Cathedral and major shrines in Philadelphia. “This is wonderful and we have wonderful people here,” he said.

Last year’s procession went very well, and this year’s procession with about 150 men, women and children also went off without a hitch despite the above 90 temperature. The procession wended its way through the residential streets between the two churches with priests of the two parishes alternating holding up the monstrance with the Eucharist under the traditional canopy, as residents peered out their doors as the joyfully singing procession passed by.

At the devotional stops along the way, bottled water was provided for the thirsty. And some who could not make it simply joined the group for the closing Benediction at St. John the Evangelist.

“This is taking healing to the people who need it the most, and I walked next to the Lord the whole way,” said Sueann Maier of St. Ignatius Parish, who along with family members participated in the procession. “I love it,” she said.