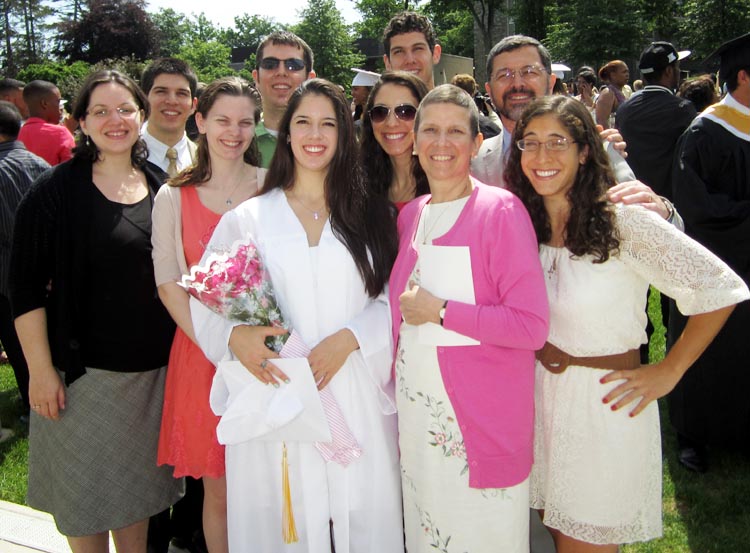 Sophia DiCamillo (at center in gown) is joined by her parents, brothers, sisters and their spouses at Bishop McDevitt High School's graduation ceremonies June 5. The youngest of six children, Sophia is the fourth in her family to give the valedictory speech at her school.

There had to be a bit of déjà vu for Mike and Mary DiCamillo and their family when Sophia, the youngest of their six children, stepped up to the podium on June 5 at Arcadia University as valedictorian for the Bishop McDevitt High School, Class of 2013, commencement exercises. She is the fourth member of the family to be McDevitt’s valedictorian.

Brains apparently run in the family. Mike is a civil engineer with SEPTA and Mary’s career has been as a Spanish professor at La Salle University and Chestnut Hill College as well as periods as adjunct faculty at Temple University and Philadelphia University.

“I credit my parents as role models because they taught me how I should act and I learned from their lives how I want to live my life,” Sophia said.

Part of that was faith. “Religion is important to me because I grew up in a very Catholic household,” she said. “We always went to church and went to Our Lady Help of Christians School (in Abington) starting in pre-school. Public education would have seemed weird to me.”

Sophia intends to continue her Catholic education streak at Jesuit-run University of Scranton. As a child she wanted to be a veterinarian, “every little girl does,” she said. Now she intends to study physical therapy and exercise science.

“When I was in my freshman year of high school I tore the ACL in my knee playing soccer and had to go through surgery to replace it,” she explained. “My experience with a physical therapist made me want to explore this. I did come back to soccer in my junior year, but in college I think I will only play intramural soccer.”

In high school she participated in the Student Council, the World Affairs Club, Student Ambassador, the National Honor Society and of course, soccer. “I do try to stay active in general,” she said.

As for being the valedictorian, this is not something the student chooses, it is the decision of the school itself. Sophia did not feel any pressure to try for the honor just because three of her siblings had done it.

Certainly when she had to write the speech on the topic of Catholic education, she did let one of her sisters critique it, but in the end it was her own doing.

Christopher, an accomplished pianist, received the Steinway Award, a special honor from the Jacobs Music Company during a May 31 concert at Immaculata. Although music, especially the piano, is a passion for him, he expects it will not be his ultimate career.

He believes he and his brothers and sisters excelled in academics because they came from a home where education was valued.

“It gave me the mindset to be driven to be educated,” he said. “Growing up in a family that values education really influences you, therefore you want to be educated as well. I have a lot of role models, especially my parents and definitely both of my grandfathers.”

For Christopher too, grounding in the faith goes back to family. “It is important to me and to all of us in different ways, not the same way,” he said. “We are all individuals and we may not perceive things in exactly the same way; we are not supermen and still go through turmoil, but definitely we have a strong faith grounding.”

Now that Sophia has graduated, the family has completed 16 years of high school education.

“It’s a little bit of a sigh of relief,” Mike said. “A huge difference occurs when they go to college.”

Although he credits Mary for much of the success of the children, he also credits McDevitt, especially David Horn, the almost legendary head of the English Department.

“He was an influence on all of our children,” he said.

As a professional educator Mary certainly had a strong influence on the children, but she is quick to credit the role of others.

“We as parents have a profound influence on the development of our children,” she said. “However the relationship they share with one another is rich and unparalleled. Our children learned kindness, perseverance and forgiveness with and from one another. Their shared experience of receiving a Catholic education in the same schools surely increased their sense of belonging and togetherness. It is immensely gratifying to observe them interacting with one another. With our sons Tom and John raising families of their own, Mike and I continue to see the lasting benefits of Catholic education.”