For 48 years in Catholic schools, Chaykowsky made friends, influenced students 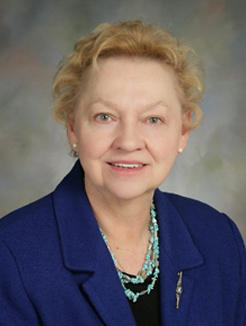 Forty-eight years is a long run in any profession. When Helen Chaykowsky, the principal at Archbishop Ryan High School, retires this month, that’s how many years she will have had in Catholic education.

The funny thing is, as a student at Chestnut Hill College, she really was thinking of pursuing journalism. When she decided on teaching instead her mother was not happy. “I wouldn’t do it for a thousand dollars a day,” she said.

“I won’t be getting a thousand dollars a day,” her daughter assured her. (Actually, she wouldn’t have gotten it in journalism either.)

After graduating from St. Basil Academy she went on to Chestnut Hill where she majored in English.

It was a visit in her senior year by Msgr. Francis B. Schulte who was then superintendent of schools for the Archdiocese and now archbishop emeritus of New Orleans that changed her mind.

The Archdiocese had a real need for lay teachers, Msgr. Schulte told them, and the presentation must have been convincing because Chaykowsky was among those who signed on.

Lay teachers were just beginning to be assigned to the high schools, she recalls, and there she was in 1965, at age 22 one of 19 brand-new female lay teachers assigned to 6,000-student Cardinal Dougherty High School.

Over the next decade she taught English at every grade and loved every minute of it. “Although most of her career would be in administration, “I still miss the classroom to this day,” she said.

She already had her degree in English; a first order of business was to back it up with a teaching certificate, which she did. In time she also got a certificate in guidance.

In 1976 she was appointed vice principal at St. Hubert High School, but was able to continue teaching one or two English classes. Meanwhile she continued her studies at Villanova University and eventually earned her master’s degree at Temple University for teacher’s certification.

In 1986 she was sent to Bishop Conwell High School as principal and was in fact the first laywoman named principal in one of the archdiocesan high schools. Being a principal was a brand-new experience especially because “as principal you don’t pass the buck to anyone,” she said.

Conwell, like St. Hubert, was all girls, and in one sense it was sad when in 1993 it merged with all boys Bishop Egan High.

But “it was exciting too, we were pioneers,” said Chaykowsky, who was named founding principal of the merged school. “It was nice to see that the kids had no problems with the merger. It is a good system when you can change yet maintain your values.”

Her next assignment (1999-2002) was relatively short as principal at Kennedy-Kenrick High School. “It was very small and I could stand in the corridor and know every kid,” she said.

Immaculate Heart Sister Janet Purcell, who is now principal at Pope John Paul II High School and who was disciplinarian and assistant principal at Kennedy Kenrick at that time, called Chaykowsky “the best principal I’ve ever had the privilege to work with, and I learned a lot from her. She was a person of integrity, always ready for a challenge, introducing new concepts and programs.”

The two have remained close friends and have taken several vacations together, always as a cruise, because Chaykowsky knows Sister Janet will not fly.

Father Gregory Hickey, who was principal at Kennedy-Kenrick at the time, already knew her from St. Hubert when she was vice principal and he was school minister.

“She is one of the most Catholic women I have ever met,” he said. “She was extremely fair and objective, just a wonderful person to work with. She was my mentor for administration and I can’t say enough about her. We have maintained a friendship ever since.”

In 2002 she was appointed principal at Archbishop Ryan, where she has been just as loved and respected as at her previous assignments.

“I’ve known her for 30 years,” said Ryan president Michael McArdle. “She has been a great partner and a great educator. She served as principal in three different schools and did great work. It is a loss to us.”

For Helen Chaykowsky, Principal Extraordinaire, the greatest memory will be the many students she taught or mentored.

“It was nice to see kids receive scholarships and succeed,” she said. “I taught Mary Rochford (former archdiocesan superintendent of schools) at Cardinal Dougherty.”

She entered the system at a time when the decline in vocations for women religious was first being felt. “Good lay people stepped in,” she said, “and the religious allowed us to do that. We have managed to preserve our Catholic identity.

“I have been blessed. I wish everyone could find a career that would make them as happy as I have been. I became the woman I am because of my experience. I loved every minute of it, and now I feel ready for whatever plan God has for me.”

NEXT: June 30 set aside for ‘Justice for Immigrants’ day in Philadelphia