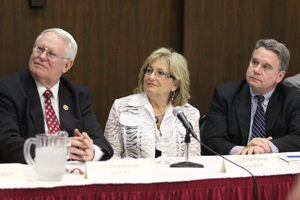 The Archdiocese of Philadelphia’s forum June 21 on the HHS mandate included U.S. Reps. (from left) Joe Pitts (R-Pa.), Diane Black (R-Tenn.) and Chris Smith (R-N.J.), along with other speakers who discussed the impact of the controversial component of the Affordable Care Act known as Obamacare. (Photos by Sarah Webb)

The devil is in the details, as they say. In this case the particular detail is, when does government regulation interfere with the constitutional right of freedom of religion?

When the Affordable Care Act (more popularly Obama Care) was enacted in March 2010, it mandated greatly expanded health coverage. Assurances were given at the time that the law would respect the concerns of those who, for reasons of conscience, oppose abortion and contraception.

It is an issue Archbishop Chaput has covered extensively in his weekly columns on CatholicPhilly.com.

Under the so-called HHS mandate issued by Health and Human Services Secretary Kathleen Sebelius in January 2012, all health plans were required to provide coverage at no cost for all contraceptives approved by the Food and Drug Administration. Some of these contraceptives may cross the line and become abortifacients if fertilization of the ovum has already occurred. 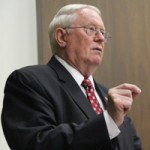 Pa. Congressman Joe Pitts participated in the June 21 forum. A member of the U.S. House’s Energy and Commerce Committee, Pitts is chairman of its Health Subcommittee. The 16th district that he represents includes part of Chester County.

In answer to the outcry that followed, a very narrow exception was made for churches, but not for charities or institutions and companies that may have objections based upon their deeply held beliefs.

The mandate, which includes stiff penalties for non-compliance, has been applied to non-church entities since January and will apply to the church entities as of Aug. 1, as matters now stand.

Among the panelists at the June 21 forum were U.S. Congressmen Joe Pitts (R-Pa.), Diane Black (R-Tenn.) and Chris Smith (R-N.J.). All three are strongly committed to the pro-life cause. Smith is Catholic, Black and Pitts are not.

Representative Pitts reminded his audience, “the first thing mentioned in the First Amendment is freedom of religion, not freedom from religion.’

The government, he said, “does not tell you to violate your beliefs, but Obama Care is forcing even explicitly religious employers to provide services that they have a moral objection to. Our freedoms are clearly under assault by government bureaucrats that claim they know what is best for America.”

Noncompliance with the HHS mandate can cost a company a fine of $100 per day per employee.

“I’m not a Catholic,” Pitts said. “But I do believe everyone has a right to live and worship according to their beliefs.”

Representative Black, along with 177 co-sponsors, has introduced into the House of Representatives a bill, HR 940, which if enacted would provide a conscience exception for anyone who objects to the HHS mandate. 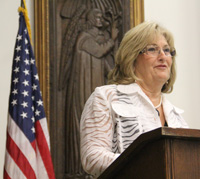 The mandate, she said, “is a gross injustice. Some will lose their job, others will lose their business, all because this administration has chosen to ignore the U.S. Constitution in this matter. This is about protecting America’s founding principles.”

The U.S Senate, Black noted, is introducing a companion bill to HR 940.

Representative Smith mentioned the “morning-after” pill Plan B and Ella, contraceptives that can be taken as long as five days after sex, as especially troubling because they may act as abortifacients by inhibiting the implanting of a fertilized egg after conception.

“President Obama displays a reckless disregard for human rights,” Smith said, recalling how in a 2009 Notre Dame University speech the president said, “Let’s honor the conscience of those who disagree on abortion and draft a sensible conscience clause.”

Randall Wenger, chief counsel for the Pennsylvania Family Institute, has represents several clients who are suing the government because of the mandate. 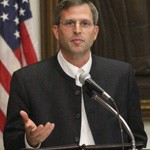 Anthony Hahn, CEO of Conestoga Wood Specialties of East Earl, Pa., said the HHS mandate’s fines for noncompliance — $100 a day per employee — would have bankrupted his family’s firm “in a month,” so the company complied.

One of the companies represented by the Pennsylvania Family Institute is Conestoga Wood Specialties, a privately owned company based in Lancaster County that manufactures doors and has 950 employees.

The company from its foundation has adhered to Mennonite values, according to CEO Anthony Hahn.

“Our religion, our beliefs, are woven into the company,” he said, adding “one of those beliefs is that life begins at conception.”

So far, the company has not been able to prevail in court challenges to the mandate.

“I’m sorry to say, since January 1, our health plan has included contraception,” Hahn said. “We could not take the $100 dollar a day fine for each employee; we would be out of business in a month.”

In the question and answer period, when asked if Congress could thwart the mandate simply by withholding the necessary funding, Congressman Pitts explained it would not be possible because the same law through which the Affordable Care Act was enacted provided for funding into the future. The funds will be provided no matter what Congress does. The only way the funding would stop is if the law was repealed, and in the present climate that can’t happen, he explained.

The Congressmen were also questioned on how the law was passed in the first place.

Speaking for the group, Congressman Smith noted there were a lot of promises made at the time which were not kept, and some individuals who would be expected to oppose it as written did not.

Pennsylvania Senator Bob Casey “aided and abetted the bill on the floor,” he said.

In Congressman Smith’s opinion, the real game-changer was “the Catholic Health Association,” he said. “A nun who was the head of it walked the halls of Congress targeting Catholic legislators saying, ‘there is nothing to worry about here. Those anti-abortion zealots are going too far.’ I know this for a fact.”

Given the divisions in Congress it would seem impossible for Black’s bill to pass in the House and a companion bill in the much more hostile Senate, especially by a veto-proof vote in time for the Aug. 1 deadline.

“I don’t know if we can get it through by August 1,” Smith conceded. “I do believe the message is, we will not cease until this is done, and that’s the message that has to go out.

“The Obama Administration is counting on weariness and turning the page. I can tell you that absolutely will not happen. The bishops, the faith community the pro-life members of Congress are absolutely committed to overturning this and we will not cease until that happens.”

NEXT: Philadelphia’s immigration lessons: How fear and hatred led to 19th century riots