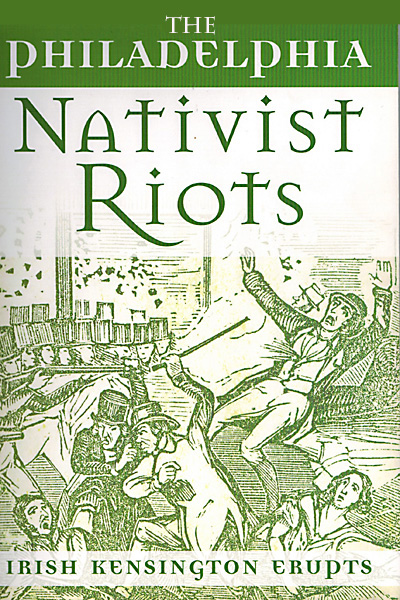 During sectarian riots, two Catholic churches were burned to the ground, another was saved only by military intervention. Virtually every Catholic church in Philadelphia County was threatened. Scores of houses were destroyed and dozens of people were killed.

It happened in Philadelphia 169 years ago, but it still has lessons for today.

The violence began in May and ended in August of 1844. It started in Kensington, where St. Michael’s Church was ultimately destroyed, spread to the older part of the city where St. Augustine’s was destroyed and flared up again in August when St. Philip Neri in the Southwark neighborhood was saved only by massive military intervention.

Kenneth W. Milano, a Kensington historian who recently wrote “The Philadelphia Nativist Riots: Irish Kensington Erupts” (History Press, $19.99), gave a lecture on the riots at St. Michael Church (which was rebuilt two years after the riots) on June 20.

Milano’s book is not just one of those pleasant neighborhood histories replete with old photographs and anecdotal memories. It thoroughly explores the root causes of the riots and the events in Kensington. He does not go into great detail on the St. Augustine and St. Philip phases, but perhaps by thoroughly focusing on one area he really gives a better understanding of the entire picture.

Both were working class, especially weavers, and they didn’t like each other any better in America than they had in Ireland. Most of the rioters were drawn from these two groups, but the excuse for the fighting has other causes.

In the immediate years preceding, “Sunday after Sunday Protestant ministers went to work in their pulpits on their congregations painting the Catholic Church in general and Irish Catholic in particular as the last evil confronting America’s Constitution,” Milano writes.

Philadelphia’s Bishop Francis Patrick Kenrick tried to get an exception for Catholic children to use the Catholic Douay Rheims Bible. The greatest single difference between the two was the Catholic Bible was annotated, the Protestant Bible was not.

The Protestants objected to the use of a Bible with denominational footnotes so there was a standoff, with Protestants believing Catholics wanted to ban the bible from the schools.

If this had been post-Vatican II, the various denominations might have gotten together with a list of texts acceptable to both sides. Interestingly, in the 1994 American English translation of the Catechism of the Catholic Church, the New Revised Standard Version of the Bible is used exclusively for biblical quotes. The NRSV is basically a Protestant translation with ecumenical input.

In 1842 the American Protestant Association, a ministerial association, was formed in Philadelphia. “Their opinions of the Catholic Church were that ‘it was subversive to religious and civil liberty,’” Milano writes. The largest single group among the ministers was Presbyterians, the denomination most favored by Irish Protestants.

Up until the 20th century there were no laws limiting immigration to America, other than health inspection of new arrivals. The emphasis of anti-immigration groups was on citizenship that could be obtained after five years.

In December 1843 an American Republican Association was formed, and their stated tenets would increase the requirement for citizenship to 21 years residence (the same as an American-born infant) and make the King James Bible mandatory in the schools. The group also would limit any kind of public office to native-born Americans, even excluding naturalized citizens.

There were other similar organizations but no matter what their name, Milano writes, “their ideology was still the same: disenfranchise the Irish Catholics, keep the Irish in their place as second-class citizens, if indeed citizens at all.”

Matters came to a boiling point on May 3, 1844 when the nativists tried to hold a rally at the Nanny Goat Market near St. Michael’s. The rally was broken up by an Irish Catholic mob.

The nativists came back in greater force on subsequent days and on May 6 there were the first serious casualties – one Catholic wounded, and a 19-year-old nativist, George Shiffler, shot to death, probably by gunfire from the nearby Hibernia Hose Company, an Irish Catholic volunteer fire department. Another nativist was severely wounded and later died.

Shiffler’s death was treated as martyrdom by the nativists, and this resulted in the burning of St. Augustine’s and St. Michael’s as well as rectories, a convent, Hibernia Hose and scores of houses, mostly of Irish Catholics but also some Protestant dwellings as the fires spread.

Upper-class Philadelphians were for the most part Protestant and anti-immigrant, but they were nevertheless appalled by the violence and volunteers guarded the other churches to ensure it did not spread further.

Meanwhile Bishop Kenrick, who issued an order to temporarily close the Catholic churches and pleaded for an end of violence, took refuge in the country. With the help of militia the violence eventually subsided.

It came back to life again in August when a nativist mob tried to burn down St. Philip Neri. This time the authorities were prepared. Troops commanded by General George Cadwalader squashed the attempt before they could achieve their purpose but not without loss of life on both sides.

Interestingly, while almost all of the damage done was to Catholic property, most of the known fatalities were Protestants. The reasons generally given, Milano notes, were the Protestant mob was on the unprotected streets, the Catholics were firing from buildings, and also some members of the Protestant/nativist mob were shot by the troops called in to put down the riots.
Milano believes there were some Catholic deaths that were not counted, but if this were so, one might wonder why there are no records of them in the Catholic cemeteries.

One direct result of the riots was the consolidation of all the little townships in Philadelphia County into the city itself, the creation of a unified police force, the dissolution of volunteer fire companies and the development of a separate Catholic school system.

The lessons for today: we are all descended from immigrants; remember how your ancestors were treated and don’t repeat the mistakes of their persecutors. Secondly, the First Amendment to the Constitution not only guarantees freedom of religion, it guarantees freedom of assembly. Even if you don’t agree with the speakers you shouldn’t start a riot.

Third, religious leaders have to talk to one another.

Some of those lessons have been learned, while others, like the country itself, are still a work in progress.