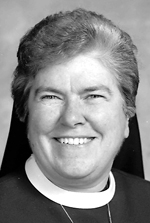 Born in Philadelphia, Sister Patricia entered the Congregation of the Sisters, Servants of the Immaculate Heart of Mary in 1960 from St. Kevin Parish in Springfield, and professed her first vows in 1963. She received her Bachelor of Arts from Immacualta University, a Master of Arts from St. Charles Borromeo Seminary and a Doctor of Education from Immaculata University.

In 1983 she was appointed as regional director for the Bucks County Area in the archdiocesan Office for Catholic Education. She was responsible for training and provided assistance to educators and promoting awareness of the value of Catholic Schools within the Archdiocese. From 1990 to 2000 she served as Director of Marketing and Public Relations for the Archdiocese of Philadelphia. Sister Patricia began by establishing marketing committees in elementary, secondary and special education schools. She worked closely with BLOCS to provide financial assistance to students in need.

In addition to the members of her religious community, Sister Patricia is survived by her sister, Bernadette (Raymond) Baraldi and her brother, Albert Spingler and nieces, nephews, grandnieces and grandnephews and a cousin, Sister Rose Anthony Spingler, I.H.M.

She was predeceased by her parents, Albert and Patricia Greeley Spingler.