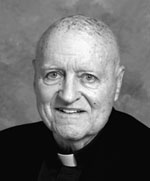 Vincentian Father Aloysius P. Grass died June 4 at St. Vincent’s Seminary in Philadelphia’s Germantown section. He was 90, and a priest for 62 years.

Father Grass served in the Archdiocese of Philadelphia at St. Thomas More High School in 1957 as prefect of discipline and then as principal from 1963 to 1969. From 1973 to 1982, he was the superior at St. Vincent’s Seminary in Germantown. Since 1988, he has resided at St. Catherine’s Infirmary in Germantown.

The funeral Mass was celebrated at St. Vincent’s Seminary June 7. Father John Cusack, C.M., who also served as principal at Tommy More from 1957 to 1963, preached at the Mass. Interment followed at the Vincentian Cemetery in Princeton, N.J.

Father Grass is survived by many nieces and nephews and was preceded in death by his brother, Father William Grass, C.M., and his sister, Sister Winifred Grass, S.S.J., of Brooklyn, N.Y.

NEXT: La Salle U. professor and band leader Brother Thomas McPhillips dies at 63