On any given weekend during the month of October 2012, there were approximately 253,338 Catholics attending Mass in churches throughout the Archdiocese of Philadelphia, according to figures compiled by the archdiocesan Office for Parish Service and Support. 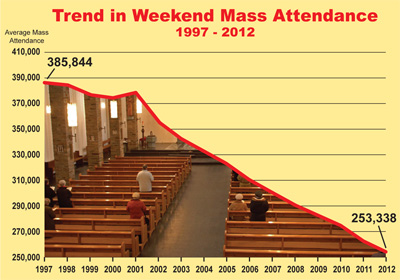 According to the same statistics there were 1,159,966 Catholics registered in the 266 parishes of the Archdiocese. That means approximately 21.8 percent of all of the registered Catholics attended Mass in October, a month chosen because it is typical – there is no snow, few people are away on vacation and there is no major holiday to distort the figures.

The figures supplied by the Office for Parish Services show observed Mass attendance in October 2012 (head counts are taken in all the churches during all weekend Masses) was down 9,488 from 2011 and down 125,456 from 2001, or a decline of 33 percent in the past 11 years.

“I think it will level off. Although it will continue to decline, the Church is not going anywhere. It’s been around 2,000-plus years,” said Dr. Thomas Denton, research and planning analyst for the Office for Parish Service and Support. “It does show we need to start evangelizing. We have to start a cradle-to-the-grave relationship with the people.”

So much for the downside. There are also success stories out there that could be built upon.

According to the figures provided, 74 parishes actually showed increased numbers from the prior year and not all of them were in areas one might expect.

For example in South Philadelphia, which has been losing Catholic population for years, attendance was up 276 at St. Monica and 264 at Our Lady of Mount Carmel.

Those parish areas are an easy work commute to Center City, and may reflect part of the return-to-the-city housing trend in the Philadelphia region.

Of the 12 deaneries in the Archdiocese only Deanery 8, which covers South Philadelphia and Northern Liberties, showed a net increase in attendance from 2011.

There were a total of 19 parishes in the Archdiocese where Mass participation exceeded 40 percent of registration.

Some of these might be expected, for example Center City and Old City parishes that welcome many visitors to Philadelphia.

That would include St. John the Evangelist with Mass attendance 54 percent of registration and the Cathedral Basilica of SS. Peter and Paul, 88 percent.

Others benefit from proximity to universities, catering to students away from home, especially St. Agatha-St. James. With a whopping 242 percent of registrations it serves away-from-home students at the University of Pennsylvania and Drexel University.

St. Patrick, which is just across the Schuylkill River, has attendance equal to 48 percent registration. The parish has a number of nonregistered graduate students with apartments in the parish attending its Masses.

At St. Patrick Parish in Norristown weekly attendance was up 265. Father Augustus Puleo credits this entirely to an ever-growing Hispanic population in the area.

When people come to make arrangements for a marriage or a baptism he emphasizes coming to Mass. Last year he noticed his Sunday morning Spanish Mass was standing-room only. He added another Spanish Mass but very soon the first was just as crowded.

“We did 250 baptisms last year,” he said, “and we will do the same this year. One day I did 40 baptisms and the next day 33. The interesting thing is we get a lot of the 20-35 age group which most parishes aren’t getting and they all have lots of children.”

The cathedral posted a weekly increase of 355 worshippers, up 24 percent from 2011. Msgr. Arthur Rodgers, the cathedral rector, attributes this to the improved economy.

“We are seeing an increase in tourism and business people traveling over the weekend,” he said. “It is getting close to what it was five years ago and we are fascinated by it.”

Regarding tourism, the opening of the new Barnes Museum and the reopening of the Rodin Museum, both along nearby Benjamin Franklin Parkway, are probably having an effect, he believes, and the improvements to the small Sister Cities Park directly opposite the cathedral also draws people.

Some who might visit during the week when volunteers are giving a tour might come back for a weekend Mass, the rector added.

Adaptability is another key to continued viability. St. Patrick Parish in Kennett Square, Chester County, which saw a 265 increase last year, has 7,549 Hispanics on the rolls today, mostly Mexican.

St. Cyprian, Philadelphia, which had an increase of 224 in Mass attendance, has 1,210 Black Catholics on the rolls.

The reigning champion in size and still growing is St. Andrew in Newtown, Bucks County. With 9,009 weekend worshippers, an increase of 259 from the previous year, it has a highly respectable 45 percent Mass participation.

“We like to think our emphasis on good preaching and excellent music at our Masses has something to do with it,” said Msgr. Michael Picard, St. Andrew’s pastor. Homilies, he noted, are generally limited to 10 minutes or so partly because of the necessity to empty the church and parking lot in time for the next Mass, but also “people appreciate a well-crafted homily that is to the point,” Msgr. Picard said.

Other factors are a Sunday evening family Mass that is especially geared to teens. A Faith for Life program focuses on families of parish school and PREP children, encouraging families to come to Mass together. There is further evangelization through encouraging the many parish sports teams to attend Mass as a body.

A bonus to all of this, “new families coming in to the parish seem to be practicing Catholics,” Msgr. Picard said.

The changing environment has meant fewer parishes but with larger territories. Some parishes have been dealing with that for years. For example St. Patrick, Kennett Square, has been around 144 years and with 60 square miles to cover, has been holding its own with a 25 percent attendance.
“We have a mixture of everything here, a lot of young professionals – doctors, lawyers,” said Father Victor Sharrett, St. Patrick’s pastor. “People who come are surprised to see a full church.”

To see statistics for any parish in the Archdiocese go to its website, archphila.org, click parishes then select an individual parish and scroll down to the section titled Report to Pastor.

NEXT: 1808 Society helps Catholics support Church far into the future