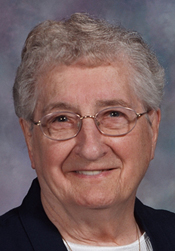 Sister Martina Therese Butalla, O.S.F., 86, died in Assisi House on July 18. She had been a professed member of the Sisters of St. Francis of Philadelphia for 66 years.

Sister Martina Therese (Jane Francis Butalla) was born in Enout, Pa. Prior to her entrance into the congregation in 1944, she was a member of St. Peter Parish in Steelton, Pa., and a graduate of Bishop McDevitt High School in Harrisburg.

She professed her first vows in 1947 and later earned both a B.S. in English from Villanova University and an M.A. in education from Providence College in Providence, R.I. Sister Martina ministered primarily in elementary education but also served for a time in both health care and elder care.

Sister Martina ministered for 16 years in the Archdiocese of Philadelphia. She served as a liturgist at Assisi House in Aston from 1992-1995. She returned there and volunteered as a driver from 2006-2009. From 2000-2006 she volunteered at Immaculate Mary Home in Philadelphia. In 2009 she became a resident of Assisi House and served in prayer ministry there until her death.

Sister Martina Therese taught for 20 years the Diocese of Trenton and served in the Harrisburg Diocese for 17 years.

Sister Martina is survived by her sister-in-law, nieces, and by her Franciscan family. Donations in her name can be made to the Sisters of St. Francis Foundation, 609 S. Convent Road, Aston, PA 19014.

NEXT: Priest who was driving force behind Worldwide Marriage Encounter dies