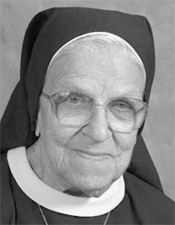 Born in Port Carbon, Pa., Sister Mary entered the Congregation of the Sisters, Servants of the Immaculate Heart of Mary in 1929 from St. Stephen Parish, Port Carbon and professed her first vows in 1932.

She was a classroom teacher in elementary schools mostly in the Archdiocese of Philadelphia for more than 50 years. In her later years she tutored children in these schools.

In 2000 she was assigned to Camilla Hall where her ministry was the Apostolate of Prayer.

The funeral Mass was celebrated July 17 at Camilla Hall. Father James P. McKelvey was the celebrant and Father William E. Dean was the concelebrant. Interment followed in the Immaculata Cemetery.

In addition to the members of her religious community, Sister Mary is survived by nephews and several grandnieces and grandnephews.  She was predeceased by her parents, Joseph and Catherine Cubshinsky, her brothers Joseph, Peter, John and sisters, Mary McGeoy and Anne Cavolaski.