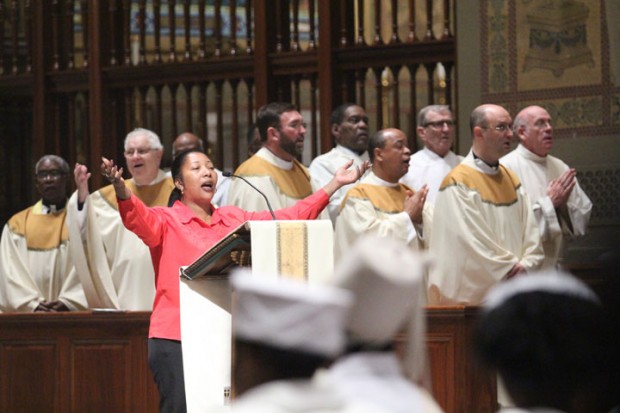 Bernadette Brooks leads the clergy and congregation in song at the annual St. Martin de Porres Mass with Black Catholics in the Archdiocese of Philadelphia Nov. 3 at the Cathedral Basilica of SS. Peter and Paul.

Bernadette Brooks is by avocation an inspirational singer. For her there is nothing better than singing the praises for the Lord, which explains why “How Great Thou Art” is her very favorite hymn.

But there is another hymn that she has recorded as a single that speaks volumes about her own faith journey. It’s called “Brought Me Through” and it goes like this:

I’ve been lost, torn and broken

I’ve been a thief, a liar and abusive….

I found it in You

The One that I can depend on

I found all I needed in You

You and only You

Are the One that brought me through.

The Lord God rebukes and punishes those whom He loves, the Book of Revelation tells us. At 48 Bernadette has had some hard knocks in life, really mostly of her own doing, she freely admits. But through chastisement, which she regards as a gift from God, she has not only survived, she has triumphed.

She started off well enough. She was born in St. Thomas Aquinas Parish in South Philly; that’s where she went to school, learned to sing and play the piano, and even sang in a play about the life of Jesus. At St. Maria Goretti High School she continued music through playing the bassoon for four years.

After high school she went to work and over the years had a variety of jobs; working in a hospital, a meat packing plant, a corner store, a makeup factory, a shoe repair shop, you name it.

Although she never married, she had four kids, Byron, Latifha, William and Malcolm.

The truth is, Bernadette’s life was a mess. She was running with the wrong crowd, and if it wasn’t for the stabilizing influence of her mother, Mildred Brooks, and Sister of Christian Community Denise Ware at St. Thomas Aquinas School, goodness knows how the children would have been raised.

Somewhere in her mid 20s, Bernadette began doing drugs – crack cocaine to be specific. At first it was recreational, but it wasn’t too long before she descended into the living hell of hard core addiction.

Nothing mattered; not God, not family, not anything. Her entire focus was on the temporary relief supplied by crack, the devil’s own food. Sure, she tried rehab a few times, but it didn’t take. She would very quickly return to her old ways, her old friends, and her best friend, the crack pipe. 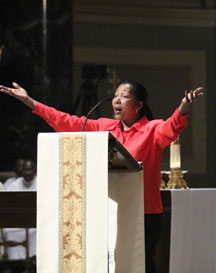 If you live that lifestyle, sooner or later, you are apt to have trouble with the law, either for possession of cocaine or for actions done to get the funds to buy it.

That’s what happened to Bernadette. Finally after an arrest, Bernadette came up before a no-nonsense judge who gave her probation, but promised, “If you break probation I’ll put you in jail for six months.”

Bernadette broke probation, and the judge, who probably thought this would happen, did indeed send her away for six months. “This way I know you will be clean,” the judge told her.

Bernadette did her time at PICC (Philadelphia Industrial Correctional Center) on State Road in Philadelphia. Going to jail is the point Bernadette considers her rock-bottom. It was not a pleasant experience, but really the medicine she needed. She missed her kids, although her mom would bring them to visit, explaining to the younger ones, “Your mom is sick and has to stay in the hospital for a while.”

Bernadette was released after her six months with the determination, “I’m never, ever, going back there again.”

She avoided her old haunts and joined a 12-step program and made it stick. “I keep thinking about that prison cell and I know whatever problems I have, getting high is only adding another problem,” she said. “I’ve been clean for 14 years and I don’t hide the fact that I am a recovering addict. I impress my children of the dangers of drugs.” 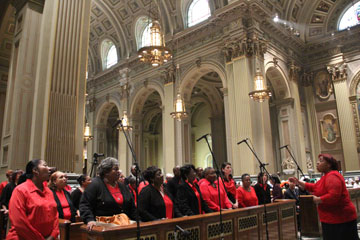 Bernadette, at far left, joins the choir for a hymn during the St. Peter Claver Mass.

Bernadette also found steady employment; she’s been an associate at Toys “R” Us for the past dozen years. As part of her recovery, which calls for reliance on one’s higher power, Bernadette turned herself over to the Lord through her current parish, St. Charles Borromeo.

Anne Tymes, the choir director, happened to hear her sing and realized she had a wonderful voice. Now she is a regular singer and co-choir director along with Anne. She also teaches a little music at St. Charles and sings at other churches, including St. Thomas Aquinas and has joined two other groups, Christ Jesus Productions and Rick Watson Productions, and as a matter of fact “Brought Me Through” was written by Watson.

She remembers when she was in prison visiting preachers would tell the prisoners to consider incarceration an act of God, a rescue.

This is something Bernadette fervently believes. “I pray daily for protection, strength and guidance,” she said.

PREVIOUS: Death did not overcome him

NEXT: Time to untangle the Christmas lights, in our hearts