Life to the fullest 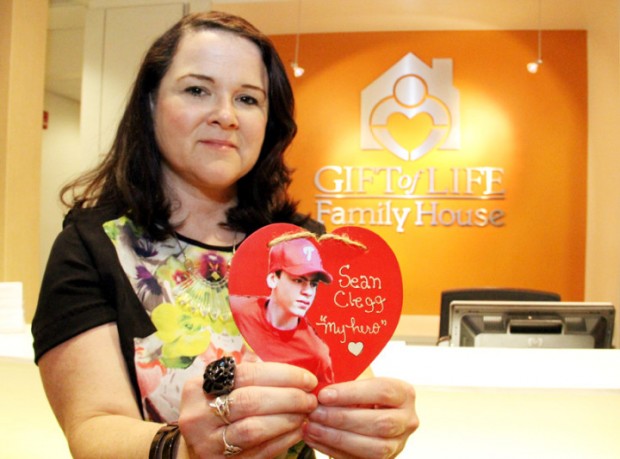 The heart photo is a photo of her donor, Sean Clegg.

Over four years ago – Aug. 26, 2008 — Melissa Coleman had to undergo an extremely critical operation at the Hospital of the University of Pennsylvania (HUP), a kidney transplant.

Just as the anesthesiologist started counting, she experienced a panic attack. Desperately, she turned to prayer, but her mind went blank. “Bless us O Lord, for these thy gifts …” she prayed as she drifted off to sleep.

“Why I thought of that prayer at that special time is beyond me,” she would later say. “If you are Catholic you know that prayer is ‘Grace before meals.’ But actually it was the perfect prayer at that moment. I was about to receive the greatest gift of all, a new kidney and a new lease on life. I certainly wanted it to be blessed by the Lord, so I am glad that was the prayer that came into my head.”

Melissa is but one of six recipients of organs donated by the family of Sean Clegg, who died as a result of being struck by an automobile while riding home on his bicycle.

Melissa, who grew up in St. Philip and James Parish in Exton and graduated from Bishop Shanahan High School, went on to Cabrini College and Penn State University and began her career doing fundraising work at the University of Pennsylvania School of Social Service.

It was in 1996, when through a physical examination she took to be a volunteer at Children’s Hospital of Philadelphia, she learned she had a rare disease that attacks the kidneys’ filtering system, Focal Segmental Glomerulosclerosis. It can lead to ultimate kidney shut-down, with dependence on dialysis and finally a kidney transplant.

By 2004 Melissa was forced to go on daily dialysis treatment, which she chose to do at home, hooked up to a dialysis machine every night for 10 hours, something that could only be replaced by a kidney transplant.

Needing a kidney transplant and getting one are two totally different things. The demand far outstrips the supply, either by a healthy living donor (often a near relative) or from a newly deceased donor who had healthy kidneys that are a genetic match.

Melissa went on the list for a kidney transplant in 2004, and because none of her relatives, not even her two brothers, were a close match it would be a long wait. She estimates she spent 15,000 hours before a suitable donor could be found. 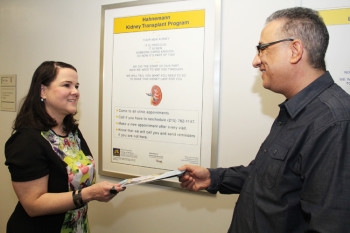 The guy she is handing a pamphlet to is George Arroyo another kidney recipient. This is something that she does for a living.

Sean Clegg, a healthy young teen from New Jersey, was riding his bicycle home when he was struck by an automobile. By chance Sean, while not a blood relative, was actually related distantly to Melissa through marriage.

As their son was dying in Cooper Hospital in Camden, where he had been airlifted, Gail and Andy Clegg made the life-giving decision to donate their son’s organs after his death.

Melissa was vacationing with her family in Ocean City, Maryland, when frantic  messages came to them that a potential donor had been located, and she should hurry home to Philadelphia, to be available at HUP should one of Sean’s kidneys be a match.

Thankfully it was a match, and within hours of its implantation in Melissa it was functioning perfectly. Through the miracle of modern medicine she was actually home three days after the successful transplant.

Through the generous decision of the Clegg family Melissa was just one of a number of people to receive new life out of their son’s tragic accident.

“His other kidney which went to an older woman, a lung went to a gentleman who is doing well, his heart went to a woman in New Jersey who afterwards gave birth to twins, a first for heart transplants,” Gail Clegg said. “It is a big comfort to our family, giving people hope.”

“I met Melissa two months after the transplant,” said Gail Clegg, Sean’s mother and a member of Holy Eucharist Parish in Tabernacle, N.J. “I call her my energizer bunny; she has so much life, she is wonderful.” 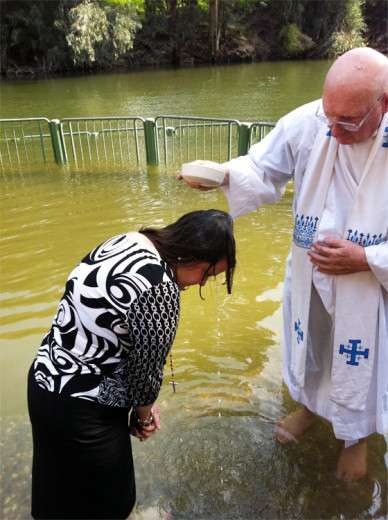 Melissa Coleman renewing her baptismal vow with Msgr. Francis Schmidt in the River Jordan during a trip to the Holy Land. (courtesy photo)

She and Melissa have made numerous appearances together since then to encourage the gift of life through organ donation, and Melissa herself has made it her career to promote donation.  She has appeared on public service announcements for organ donation awareness and at this time she is Physician Relations Manager, Transplant Department, at Hahnemann University Hospital in Philadelphia.

“I work with people who are to receive donated organs,” she said. “I do patient education on the benefits of transplants.”

“Melissa is an excellent advocate for organ donation,” said Sandra Cantera, R.N., who is director of Abdominal Transplant at Hahnemann. “It is wonderful for patients to see Melissa as a transplant recipient because she is so vibrant, looks so well and is doing so well.”

Transplantation is very important, and is the gold standard for treatment of care for end-stage disease, Cantera explained. Technically kidney transplantation is not considered life-saving, because patients can survive for many years through dialysis, but it definitely does improve the patients’ quality of life, if they no longer have to undergo dialysis.

By receiving a new kidney Melissa has been able to start a new career and lead a normal life. Like all organ transplantations it is a great gift on the part of the donor.

Melissa is truly grateful for her gift and last year, thorough her parish bulletin at St. Isaac Jogues in Wayne, she learned of a Holy Land pilgrimage and her participation in it was a form of thanksgiving to God.

“I don’t know that my faith was as deep before my surgery,” she said. “Through God, I thought who better to talk to people about transplants than someone who has had one?”

NEXT: Reflecting on baptism as if coming into the Church now