She gives the joy of her youth 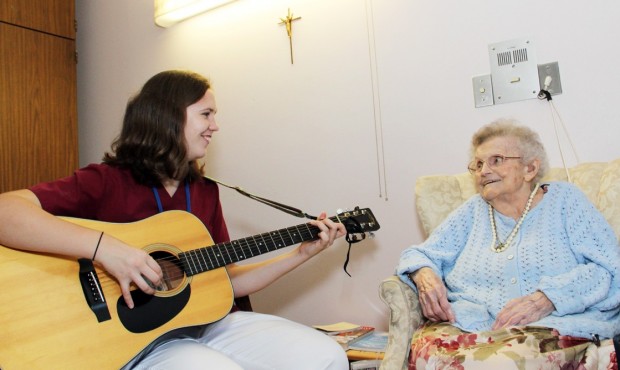 At age 22, Mary Kate Grady, fresh out of college and just completing a summer work program at the Little Sisters of the Poor’s Holy Family Home for the Aged in West Philadelphia, really doesn’t know what God has in store for her. Will it be religious life, or lay single life or a married mother with children?

One thing she does know, it will definitely involve service to the needy, and it won’t pay a great deal of money. That’s OK. After all, her late aunt, Sister Mary Lawrence, was a Poor Clare Nun at their Langhorne monastery. Holy poverty is in her genes.

“I’m still searching, I try to be open. I have a pull toward religious life, but I’m not sure,” she said.

Mary Kate’s life to date has been a journey in more ways than one.

The third and final child of Joseph and Lois Grady, she was baptized at St. Albert the Great Church in Huntingdon Valley. Her baptismal name honors first of all, the Blessed Virgin Mary and secondly St. Katharine Drexel, whom Mary Kate considers her personal patron saint.

She was only 3 when her mother died, but when Joe Grady remarried, Anna Grady became everything a mother should be for the young family.

Although the family was very religious they did not worship at a single parish. Her First Communion was made at St. John Cantius Parish in Philadelphia, and for a time they also attended Mass at Our Lady of Calvary in Philadelphia, where Mary Kate, who was only about 6, joined her brothers, Matt and Joe, in a Junior Legion of Mary program. As part of their outreach they would do volunteer work at St. John Neumann Nursing Home.

Matt Grady, who just this summer became a priest for the Diocese of Venice in Florida, remembers his little sister well from that period.

“She had no fear,” he said. “She would go to the grumpiest person there. She would push the patients to the chapel for Mass, when she couldn’t even see over the top of their wheelchair.”

This was also the period when Mary Kate had her first contact with the Little Sisters of the Poor, because Sister Winifred, who was missioned to Holy Family Home, would visit the church to solicit money, and the family also visited the Holy Family Home several times.

Joe Grady had a Catholic radio ministry in Philadelphia, but just about the time Mary Kate was ready for school the family relocated to Pleasant Mount, in Wayne County, Pa. Part of the Scranton Diocese, the town is where Joe still conducts My Jesus Mercy Ministry.

The children were home schooled for the elementary grades with a great emphasis on Christian formation, and for their high school years with the encouragement of their parents, they went to residential programs in La Crosse, Wisconsin.

In Mary Kate’s case it was to a convent of the Sisters of St. Francis of the Martyr, St. George, where a small group of girls lived while attending nearby Aquinas High School. It was not an aspirant program per se, just a program for young girls who were open to a religious vocation in any congregation, should they decide to enter religious life, and if not, whatever vocation in life they settled upon.

Although her family encouraged her choice of schools it was her ultimately own decision, but nevertheless the reality of being a thousand miles or so away from home at such a tender age was a bit of a shock.

“It was hard at first but I grew to love it,” said Mary Kate, who especially appreciated the morning Mass, evening prayer and time of Adoration. She also became active with her school’s pro-life group, even participating in sidewalk counseling.

“She is a gift to us. I often think how selfless she is,” Anna Grady said. “She is always interested in you and what you have to say.” As to Mary Kate’s future, “She would make a good lay missionary, she is very good with children,” her mother speculated.

Meanwhile her two brothers had moved on to Ave Maria University in Florida, and when her time came Mary Kate opted for an equally conservative Catholic college – Franciscan University of Steubenville in Ohio. “It was closer to home,” she said.

There she majored in Spanish with minors in business management and mental health, a rather eclectic mix, unless you understand her reasoning.

“In high school I found I was good at language; I had Latin and Spanish,” she said. “If I am going to be working with people I will need the business management and the mental health was really involved with psychology which is important with business management.”

“I think she majored in Spanish because she will probably do mission work in some way, maybe in Mexico,” said Kathryn Nunes, a close friend and roommate at Franciscan University.

“She is really good with people and can talk to anyone,” Nunes said. “She is generous and caring and takes herself lightly. I was a nursing student and she would listen to my woes. She is also very funny and has the knack to make people laugh.”

This latter ability served her well this summer at Holy Family Home where she was a hospitality aide. She served meals to the residents, just visited them, conversed with them, played guitar and sang to them.

“I guess I have come to understand the elderly better,” she said. “I never realized how much we have in common with them. They want to be active, and they have a lot to offer; they have words of wisdom.”

A special treat was to visit Sister Winifred, who is now an elderly and frail invalid, and sing and play for her.

The active sisters of the order “are busy all the time,” Mary Kate said. “Their lives are all wrapped up with the residents and they are here for them all the time. They don’t have Saturday and Sunday off; theirs is a way of life I’ve never seen before.”

In the context of a presumed long life ahead of her, this brief summer at Holy Family Home was but a moment. The Little Sisters of the Poor have been in Philadelphia for 143 years. This haven where Mary Kate has ministered is, after various location changes, the city’s oldest Catholic ministry to the aged. The passport for entry is not a healthy bank account. Just the opposite — it is reserved for the elderly of low income, and the nine sisters and their staff provide the three levels of independent living, assisted living and personal care.

Other than the modest sums the residents pay, the home receives Medicaid payments and relies for the rest on free-will donations from those who love the ministry. At the insistence of the congregation’s foundress, St. Jeanne Jugan, it has no endowment; the sisters rely entirely on Divine Providence.

Aides such as Mary Kate are important, said Holy Family’s superior, Mother Marie Edward, because “with their youthful enthusiasm they bring hope to the elderly, and it is a joyful learning experience for the youth.”

Thanks to the young workers, various excursions including a trip to the zoo was possible as well as other field trips and extra parties, which the sisters would not have been able to accomplish without them. And it is deeply appreciated by the 97 residents.

“Holy Family is wonderful,” said Mary Kane Olkowski, formerly of St. Francis Xavier Parish in the Fairmount section of the city. “We have Mass and communion every day, and I have never had so many parties in my life. The young people are wonderful and all of the people take care of me like they were family.”

Nancy Weldon, who is from Immaculate Heart of Mary Parish in Andorra, with whom Mary Kate stopped by to visit, couldn’t agree more. “They keep us busy with lots of activities and it is nice to see young new faces come in,” she said.

Now that summer is over, Mary Kate is off to St. Ann Mission, in Belcourt, North Dakota. She will be a lay volunteer for a year or so with the Sisters of the Society of Our Lady of the Most Blessed Trinity (SOLT), who work among the Turtle Mountain Band of Chippewa at the nearby reservation.

“I expect I will be doing development work, writing grants, fundraising,” she said.

After that, it is all in the hands of God.

PREVIOUS: Whatever it takes: A little girl excels at math, thanks to her family

NEXT: Listen to the Lion