Whatever it takes: A little girl excels at math, thanks to her family 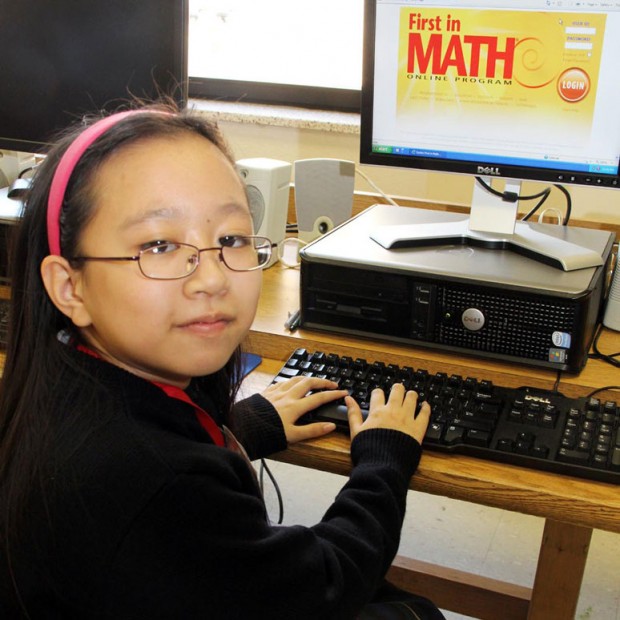 Josephine Nguyen, who in June completed grade four at St. William School in Philadelphia and continues on at St. Cecilia School this year, is one kid in a million. Make that one kid in 1.4 million.

That’s the number of elementary school students in America who participated in the popular online First in Math program at various levels last school year, and among them Josephine amassed 49,270 points, the most in the country this past school year and almost 2,000 more than the runner-up.

Age 9 at the time, she is the youngest player ever to receive number-one ranking in the decade-old program.

First in Math is a computer-based program that is designed primarily to reinforce the mathematics skills learned in the classroom through game-like exercises that add an element of competition to the process.

Many students will compete through their classroom computers or those in the school computer lab, but they are also encouraged to continue playing through their home computer.

Without a home computer it would be impossible for a student to log the necessary computer hours needed for a top score. This was a problem for Josephine when she was in second grade because her family did not have a computer.

Her parents are immigrants from Vietnam. Her mother, Kim, escaped by boat in 1983 and came to America three years later; her father, Joseph, arrived in 1990 and they earn a modest living working in a nail salon.

The family is Catholic and they enrolled their only child, Josephine, in St. William School thanks in part to a grant from the Children’s Scholarship Foundation, which follows her to St. Cecilia now that St. William is closed.

Because they did not have a computer that first year Josephine would go online at the Free Library after school hours. The difficulty with that was the library would limit computer sessions to a half-hour.

To overcome this, her father would take her by bus from the nearby Lawncrest library to the Bushrod Branch on Castor Avenue or the Northeast Regional Library on Cottman Avenue.

When she was in third grade the family purchased a laptop, which saved a lot of wear and tear on Josephine’s father.

“I would do First in Math three or four hours a day,” Josephine estimated. “I love to solve problems and math is my favorite subject.”

Although First in Math is not designed to be a primary teacher but just reinforce and perfect the skills learned in class, students who are proficient in the program often find themselves learning ahead of the taught curriculum, and even help their peers who have not yet gotten that far.

This was the case with Josephine, who would turn to her father for an explanation whenever she herself came across new material not covered in class.

“She is smart, and I wanted her to get better,” Joseph Nguyen said.

For her accomplishment as top scorer this year Josephine received an Apple iPod from Robert Sun, CEO of Suntex International, the Easton, Pa. company that produces First in Math.

For all of her math and computer skills, she remains a well-rounded child. Reading is one of her other favorite pastimes, especially the Lemony Snicket “Series of Unfortunate Events.” For sports she plays field hockey, and she also likes all types of art. While she is much too young to settle on a career, she thinks she will probably major in math as an undergraduate in college, but after that, who knows?

Her dad is set on her studying to be a doctor, but she is not so sure. Her mom has heart problems, and Josephine has told her, “when I grow up I’ll be a pharmacist and get your medicine.”

“I don’t mind, anything she wants to do,” her mother said.

Then again, Josephine does love art and maybe that will be her field, she speculates.

At St. William, the school was conducted by the Sisters, Servants of the Immaculate Heart of Mary. “Josephine is a member of the Junior Companions of the Immaculate Heart,” Sister Mary Hoesle said. “They meet every other week, they learn a virtue of the month and prayers, and we’ve taken them to our motherhouse. She was very diligent about it and looked forward to the meetings.  We give them a little button and she wore it every day. We teach at St. Cecilia too, so she will be in it there also.”

You never know. Maybe her vocation won’t be mathematics or medicine or pharmacy or art. But that’s in God’s hands.

PREVIOUS: A priest, his wife, children and parishioners: once Anglican, now Catholic

NEXT: She gives the joy of her youth