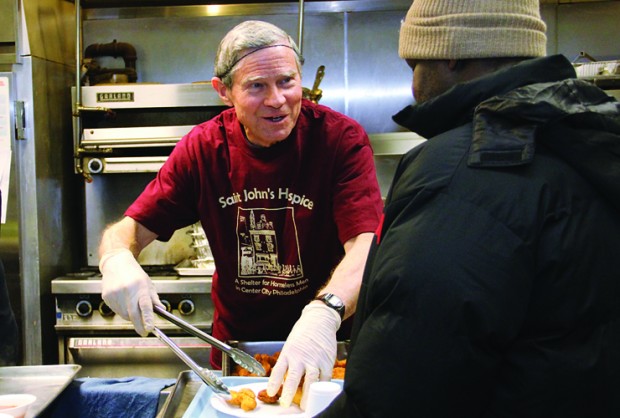 Volunteer Ted Wahl serves a meal to the needy during his weekly service at St. John’s Hospice in Philadelphia.

Most mornings you will find Ted Wahl in a pew at Nativity of Our Lord Church, Warminster, but just don’t look for him there on Mondays. That’s the day he rises at the crack of dawn, hops the train to center city Philadelphia then walks to St. John’s Hospice where he will spend the day as a volunteer in kitchen work serving the poorest of the poor.

“Mondays are always busy,” Ted said, “especially later in the month when money runs out for the men who come there. Last week we had 428 men come in for the main meal.”

Ted, 65, is originally out of Queen of Peace Parish in Ardsley, Bishop McDevitt High School and La Salle College, where he earned his degree in industrial management (after a brief stint with the Marine Corps Active Reserve) and ultimately a career with Allstate Insurance as a casualty claims manager. 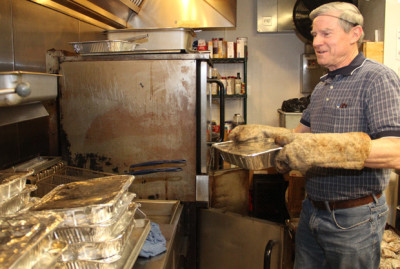 He was 22 when he met his wife, Judy, at a Delaware County Mass; they married in November 1970 and raised their three now-grown children Julie, Ted Jr. and Colleen in Nativity Parish.

They did the kind of things active Catholics do for their parish. Ted was soccer coach, a member of the C.Y.O. board, a Catholic Charities collector and for 23 years a Eucharistic minister. Judy, a Catholic school teacher now retired, for many years made — and still makes – casseroles that would be taken to the parish for ultimate delivery to St. John’s Hospice.

About 10 years ago Ted was looking for some way he could give back for the blessings he’d received.

“Our pastors, first Msgr. William O’Donnell and now Father Angelo Citino, were always encouraging us to help our fellow man and were a big influence on my decision to help at St. John’s Hospice,” he said.

“Ted and his wife are just very good people,” Father Citino said. “He is an excellent man, a man filled with faith. There is a genuine goodness about him.”

Actually, it was Judy who suggested to her husband that he consider St. John’s Hospice when with their children grown and no longer in C.Y.O.  He was looking for a new outlet for volunteering.

“He finds he feels fulfilled in doing something, and he thinks they do a very good job and are well organized. He’s optimistic and a calming person, and for him it is easy to see the good in everyone.”

In spite of Judy’s making casseroles for the hospice all those years, neither had ever visited it. 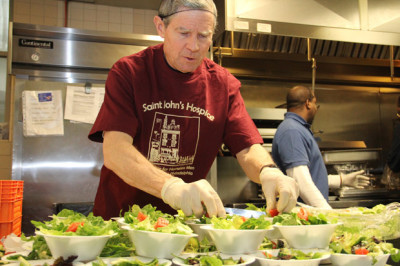 It was a real eye-opener for Ted, who started as an occasional volunteer to a full day every week after his retirement five years ago.

St. John’s Hospice, an agency under Catholic Social Services of the Archdiocese of Philadelphia, is celebrating its 50th anniversary. Affectionately known by the transient men it serves as “Father John’s,” it began as a ministry of nearby St. John the Evangelist Parish. It was founded by Msgr. Anthony O’Neill and for years staffed by the Little Brothers of the Good Shepherd.

At this time, in addition to the noon feeding program that operates six days a week, St. John’s shelters 40 men in transition from homelessness on the premises, another 12 medically fragile men in the adjacent Good Shepherd Program and 27 men on a rotating basis in the overnight Coffee House drop-in program in the converted adjacent alley.

It goes without saying the men who come are of every race and creed and no distinction.

Ted’s Mondays at St. John’s begin by assisting with the preparation and serving of the men who are in residence. He then segues into working on the big noontime meal open to all comers.

For him it’s not just a matter of serving people in an impersonal manner. He tries to engage the men while he is doing his work. “I try to talk to them about something that might interest them, maybe sports,” he said. “I try to talk to them as if they were one of my buddies. They are all different, some don’t want to talk and I try to respect that. I just say, ‘Here you are sir, enjoy your meal.’”

That really is what was instilled in him when he first started volunteering, and his supervisors emphasized how important it was to respect the men. 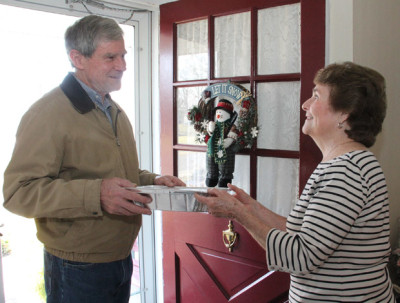 Judy Wahl gives husband Ted a casserole she made for delivery to St. John’s Hospice, the Catholic Social Services agency at which he serves faithfully every week.

“I was told, this may be the only kind thing that happens to them all day. Most people they meet just want them out of their way,” Ted said.

“Ted is one of the quiet people who are always giving,” said Gerry Huot, director of Community Relations at St. John’s Hospice. “He’s a valuable person, consistent and dependable. He gives without question and never asks for anything in return.”

For Ted’s part the work at St. John’s reminds him of another meal – the breaking of the bread by Jesus on the road to Emmaus. “A lot of times we don’t recognize Christ in our fellow man,” he said.

Learn more on the website of St. John’s Hospice, which is assisted through the CatWarmholic Charities Appeal.

PREVIOUS: Spend time with prayers of the Mass, outside of Mass

NEXT: Moved to cheers