Father Chuck Pfeffer’s vision of leadership lives on at CLI 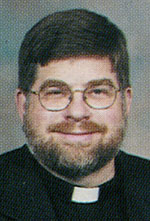 Catholic Leadership Institute, based in Wayne, has recently announced the formation of the Father Chuck Pfeffer Society as a part of their annual fund.

The society honors the memory of Father Charles Pfeffer (1951-2004), a priest of the Archdiocese of Philadelphia, by recognizing donors for their leadership and support through gifts of at least $1,000 to the Catholic Leadership Institute. All such donations made prior to Sept. 30 will be matched up to $250,000 by one generous donor. CLI hopes to raise $500,000 by that date through gifts to the Father Chuck Pfeffer Society and the match.

CLI, which was founded by businessman Timothy C. Flanagan in 1990, now has spread its formation programs for church leaders to 70 dioceses nationwide, ministering with priests, religious and lay men and women.

In its early years Flanagan worked closely with Father Pfeffer, who was then director of the Office for Youth and Young Adults for the archdiocese.

Father Pfeffer’s input was so crucial he is considered the co-founder of the organization. Through his work with young adults (ages 21-39) he realized the key to the ongoing success of programs was leadership, ideally peer leadership. Working together, such programs were established by Flanagan and Father Pfeffer through CLI.

“Just as Father Chuck passionately pursued  the formation of leaders in order to bring others to Christ, so these donors enable Catholic Leadership Institute to continue to grow its ministry, building  on the foundation that Father Chuck started,” said Nicole Berlucchi, director of philanthropy for Catholic Leadership Institute. “The Annual Fund supports our programs that are not supported by revenue income such as the seminarian leadership pilot program and our virtual learning platform, which provides ongoing support to our graduates  of our Good Leaders, Good Shepherds Program.”

For further information on CLI see