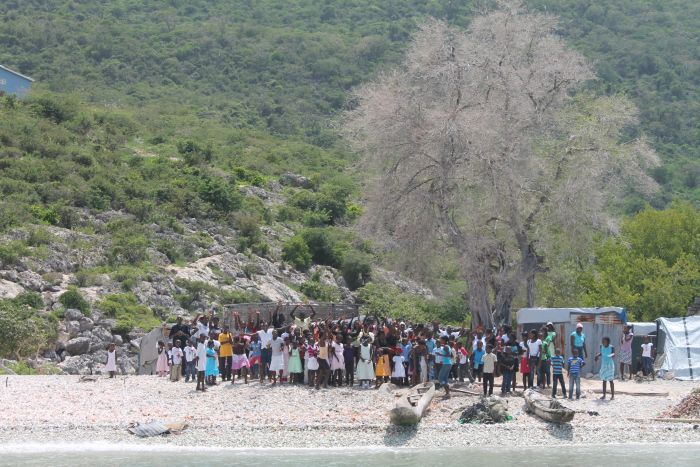 Residents of St. Mary’s Fishing Village at Gonave Island gather on the beach to joyfully welcome Msgr. Francis X. Schmidt along with Father Chuck’s Challenge contributors and Food for the Poor staff as their boat nears the shore. Buildings house fishing gear and some older dwelling shacks not yet replaced by houses on safer high ground. (Lou Baldwin) 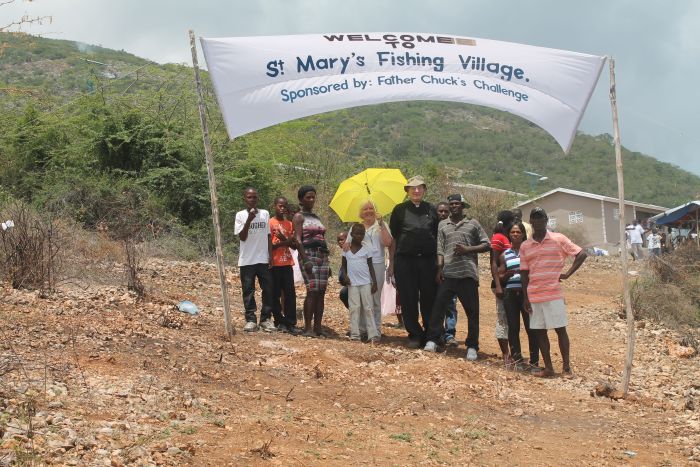 Try to imagine what it would be like to be a member of one of 57 families living in shacks on a narrow, isolated beach, literally cut off from civilization.

Welcome to St. Mary Fishing Village, located on the Island of Gonave off the coast of Haiti. Gonave is relatively large, about 283 square miles, but the terrain is harsh.

Isolated villages like St. Mary have no roads and residents must travel by boat to other areas of the island or to Haiti itself, which is about an hour and a half away by motorboat, threading one’s way through dangerous shoals. There is no drinkable local water source other than rain water and of course no electrical service.

Thanks to Msgr. Francis X. Schmidt and the charity he founded, Father Chuck’s Challenge, 25 of those families have brand new homes perched on slightly higher ground and four motorized boats to pursue their livelihood.

(See a photo gallery of images from Father Chuck’s Challenge in Haiti. Listen to a woman from one of Father Pfeffer’s Villages singing in Haitian Creole.)

To do this Msgr. Schmidt, pastor emeritus of St. Augustine Parish in Bridgeport, worked through Food for the Poor, which is America’s largest international relief organization and which specifically focuses on Central America and the Caribbean.

The houses are really quite tiny by American standards. They have two rooms totaling less than 400 square feet; concrete floors, concrete walls and a corrugated metal roof.

The new houses have amenities that are rare for the vast majority of Haitians. For example they feature tiny indoor bathrooms, a solar panel that will light up to three electric bulbs and a cistern to collect the rainwater from the roof and hopefully carry the family over the long dry spells of semi-arid Haiti.

Best of all, the houses are given free and clear to the families, which enables them to utilize what might have been rent for their former shacks to other pressing needs.

Speaking in Haitian Creole through an interpreter, Nasser Sevelien said, “This is a miracle, we have no words to thank you. I will pray for you for what you have done for me and my three children.”

Overall, Father Chuck’s Challenge has spent $434,000 in St. Mary, of which $65,000 was spent for the boats and fishing gear and the balance for the housing. The housing was more expensive than at other such projects because of the necessity of bringing everything over to the island by boat, plus the need to install the solar lighting and the indoor plumbing.

Interestingly, an old-fashioned sailing ship was the cheapest available vessel capable of bringing the very heavy cargo to the village. 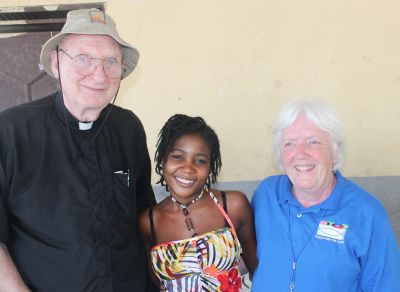 Msgr. Schmidt and his assistant Connie Hunt with Natasha Charles, 22. Natasha the recipient of a house in Father Pfeffer’s Village, Baussan, is now a nursing student and was the cantor you hear taped during the celebration of Mass at the village. (Lou Baldwin)

Msgr. Schmidt founded Father Chuck’s Challenge in 2007, in memory of Father Charles Pfeffer (1951-2004), a priest of the Archdiocese of Philadelphia and successor to Msgr. Schmidt as director of the Department of Youth Activities for the archdiocese.

Since its inception it has raised $3,569,803, the bulk of which was spent in Nicaragua, where coupled with matching funds from the American Nicaragua Foundation, it was possible to build 750 homes with modest furnishing, 11 community centers, two medical clinics, three school buildings, three chapels, a rectory, as well as supplying fruit trees, goats and more than 2,000 chickens.

Yet as clear as the need is in Nicaragua, it is even greater in Haiti, which was already the poorest nation in the Western Hemisphere when it was further devastated in 2010 by an earthquake that killed many thousands of people and left 1.5 million homeless.

Three years later a half million are still living in tents.

“I’ve been to other poor countries before, this is hell on earth,” said Kathy John, who paid for one of the houses along with her husband Rhys, and was part of a Father Chuck’s Challenge visit to Haiti.

With that said, she thought the people in the isolated village, despite dire poverty, seemed happier and healthier than those she encountered in Haiti proper. “You didn’t see the vacantness in their eyes (that) you see in the towns,” she said.

Observing first-hand the results of the contributions of themselves and others was the chief reason for the Haiti visit, but just as important was the interaction  with the people. Nowhere was this more evident than when the youngest visitor, 14-year-old Dylan Hunt, demonstrated to the children how the kites supplied by members of the group should be assembled and flown.

“The pure joy that came from each smile was amazing,” Dylan said. “Though they have so little, but to be so happy, was amazing.”

This phenomenon of the young people being the best communicators with the residents has been noticed during other visits, according to Connie Hunt, Dylan’s grandmother and Msgr. Schmidt’s right hand in the operation of Father Chuck’s Challenge.

Nothing affirms the donors more than the witness given by residents whose lives have been changed. 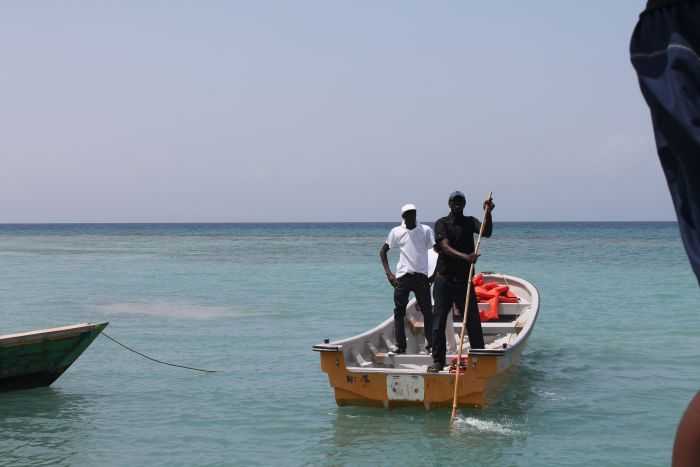 Fishermen from St. Mary’s Fishing Village show their new boat, part of the gift to the village from Father Chuck’s Challenge. (Lou Baldwin)

At Father Pfeffer’s Fishing Village in Baussan, Natasha Charles, 22, said, “I had nowhere to live, and now I have a beautiful house.”

Natasha is a perfect example of how Father Chuck’s Challenge really does change lives. Through having a house at no cost she is able to concentrate on the future. Now she is enrolled in a nursing program in nearby Leogan and hopes to graduate in four years.

Meanwhile she is a cantor and extraordinary minister of the Eucharist when Mass is celebrated in her village, and in addition to her native Haitian Creole she sings hymns beautifully in French and Latin. She truly represents what Haiti can and should be.

In addition to the villages, the dozen members of the Father Pfeffer group visited a number of sites where Food for the Poor provides aid, mostly in the form of food and other supplies.

The tour included FFP’s own feeding station near Port Au Prince, where more than a ton and a half of rice is boiled six days a week along with a nourishing stew of chicken or fish and vegetables, which is distributed and taken home to feed an estimated 50,000 people.

There was a home for approximately 200 poor elderly conducted by Korean priests and nuns, a children’s home located in Petionville in a ramshackle complex temporarily replacing their earthquake-destroyed home and also a hospital that specializes in replacing limbs, staffed mostly by volunteers who come on a rotating basis.

There was also a fish hatchery operated by FFP that distributes free fingerlings to area farmers who pond-raise them for sale. It is all God’s work.

“I think we are reaching the poorest of the poor, the most forgotten people you can think of, in a fundamental positive way, for a relatively small amount of money,” Msgr. Schmidt said. “Our donors are blessed to be able to do this. Some of the homes have been funded by members of Father Chuck’s family; they have been contributing from the beginning.”

NEXT: Father Chuck Pfeffer’s vision of leadership lives on at CLI