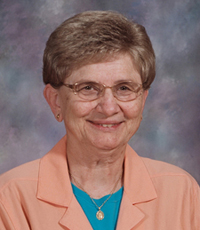 Sister Patricia Przybylski, O.S.F., formerly Sister Robert Michael, died Aug. 27 in Assisi House, Aston, one day before her 73rd birthday. She had been a professed member of the Sisters of St. Francis of Philadelphia for 51 years.

Sister Patricia was born in Baltimore, Md., where she was a member of the Shrine of the Little Flower Parish and a graduate of the Catholic High School of Baltimore. She entered the congregation in 1959 and professed her first vows in 1962.

She earned a B.A. in English in 1971 from Neumann University in Aston, and became a certified Catholic chaplain in 1983. Sister Patricia ministered in elementary education for many years but since 1979 she served in parish ministry.

She ministered for the past 23 years in the Diocese of Charleston where she served in pastoral ministry at St. Andrew Parish in Myrtle Beach (1990-2013). She is a past recipient of the Catholic Woman of the Year award by the parish’s Women’s Club.

Sister Patricia’s 20 years of ministry in her native Baltimore included teaching at Immaculate Conception School in Towson (1970-1972) and at the Shrine of the Little Flower School (1972-1979), where she herself attend elementary school. From 1979-1990 she worked as a pastoral associate at St. Clement Parish in Rosedale.

Sister Patricia ministered for seven years in the Archdiocese of Philadelphia. She taught at St. Mary School in Manayunk (1962-1965) and at St. Aloysius School in Pottstown (1966-1970). Additional ministry experience included teaching at Blessed Sacrament School in Bally (1965-1966), part of the Diocese of Allentown.

Sister Patricia is survived by her brothers, Robert and Michael Przybylski and their families and by her Franciscan community.

NEXT: Carmen Errotaberea, 91, was social worker for Philadelphia Archdiocese