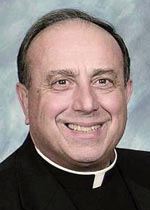 Born in Philadelphia, the son of the late Anthony and Madeline (Perrucci) D’Angelico, he attended Resurrection of Our Lord School in Philadelphia and Bishop Egan High School in Fairless Hills before entering St. Charles Borromeo Seminary.

He was ordained May 18, 1974 by Cardinal John Krol at the Cathedral of SS. Peter and Paul and his first assignment was as parochial vicar at St. Donato Parish, Philadelphia.

He also served as parochial vicar at St. Cecilia, St. Martha, St. Dominic, St. Clement and St. Paul Parishes, all in Philadelphia. He was appointed pastor of Annunciation B.V.M. Parish, Philadelphia, in 1996 and pastor at Our Lady of Good Counsel in 2003, serving until his death.

“We’ve known each other since the first day I entered the seminary in 1966, and he was the best of friends, he was absolutely wonderful,” said Msgr. Joseph J. Nicolo.

Msgr. D’Angelico’s greatest single attribute was his love of the priesthood and the Eucharist, Msgr. Nicolo recalls. Seriously ill since last November, “his only desire  was to get better and go back to ministry,” he said.

Even in his final days in hospice confined to his rectory he insisted on celebrating Mass.

The small congregation in the rectory consisted of concelebrating priest friends, other friends, family and staff. Finally, he was too weak to be principal celebrant but nevertheless wanted the Mass and served as a concelebrant.

Karl Heck, the organist at Our Lady of Good Counsel, also counts Msgr. D’Angelico as a good friend and good priest. “We had him for 10 glorious years,” he said. “He had a strong devotion to the Blessed Mother and always insisted on roses on her altar for her feast days. He also had a devotion to sick people.

“He loved to go out to dinner and he loved trips to Lewes, Delaware, when he could,” Heck recalls. “He opened his heart to the parish and always called us ‘My dear people.’”

Msgr. D’Angelico’s funeral Mass is scheduled to be celebrated by Archbishop Charles J. Chaput at 11 a.m. Monday, Aug. 26 at Our Lady of Good Counsel.

Concelebrants will include Msgrs. Thomas P. Flanigan and Robert J. Powell; Fathers John J. Kilgallon, Robert G. Suskey and William A. Trader and Msgr. Nicolo, who will be the homilist.

Msgr. D’Angelico is survived by cousins.

NEXT: Franciscan Sister Patricia Przybylski, who served in parish ministry, dies at 72