Conference at Neumann U shows sports as path to peace 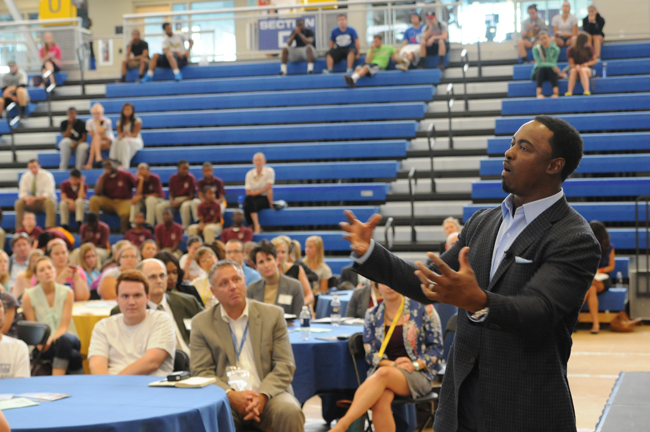 Former Philadelphia Eagle Brian Dawkins speaks to about 300 students, faculty and participants of the Beyond the Divide conference Sept. 10 at Neumann University in Aston. 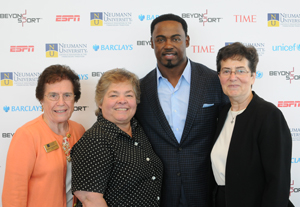 Playing sports provides many valuable life lessons such as how to work as a team, how to be a good sport and how to get along with others.

The last lesson was incorporated into a “Beyond the Divide” conference hosted by Neumann University Sept. 10. The all-day conference focused on how sports can bridge religious differences and reduce conflict.

It was part of the annual Beyond Sport Summit and Awards, an international event attended by 1,000 people that took place Sept. 9-11 in Philadelphia.

Neumann’s participation in the summit happened somewhat serendipitously, according to Lee DelleMonache, coordinator for the Institute for Sport, Spirituality and Character Development at the Aston, Delaware County university. She said Bill McLaughlin, a former university board member, introduced the institute staff to the Rhiannon Group, a global event marketing company that was helping Beyond Sport host the summit in Philadelphia.

It turns out the missions of Beyond Sport — promoting, developing and supporting the use of sports to create positive social change across the world – and the institute’s emphasis on the spiritual and ethical dimension in sports were an excellent match.

Beyond Sport “never explored sport as a peace builder or a method for conflict resolution,” DelleMonache said. “For us it was just a perfect connection because of Neumann’s Catholic Franciscan values of respect and dignity for each person no matter what their background or faith. It was a natural fit.”

Sessions during the day included two panel presentations, roundtable discussions and workshops on the concept of sports as an effective tool for conflict resolution.

DelleMonache said more than 60 international delegates participated in the conference as well as about 300 Neumann faculty members and students and 50 community members. 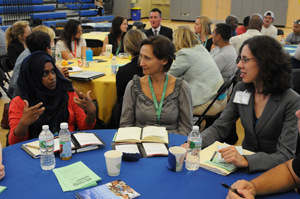 Participants from countries around the world participated in workshops and small group discussions at Neumann University, bringing their perspectives to the day’s theme of using sports as a means of conflict resolution.

She noted that Beyond the Divide gave Neumann a unique opportunity to have faculty members from various academic disciplines – philosophy, theology, education, communications and sports and entertainment management – moderate the panel presentation and facilitate discussions during the day.

“Faculty members also invited their students and facilitated their own break-out session and connected the presentations with their course topic,” DelleMonache said. “It was a unique learning and teaching experience that they never had before. That was really cool.”

The highlight of the day for many attendees was the closing talk by former Philadelphia Eagle Brian Dawkins. He emphasized the importance of his faith in dealing with conflicts on and off the football field.

(Watch a video interview with Dawkins:)

“It was very important to understand who I am and not allow the game that I play define me,” Dawkins said during an interview with Neumann Media. “Football does not define me. It’s the job that I did. Who I am is based on the relationship I have with the God that I serve. That (relationship) strengthens me in every area of my being. It gives me peace. It gives me patience. It gives me everything I need to endure whatever storm that comes so I can be a better person for those around me.”

Dawkins used a sports analogy to describe why faith is important. “Faith is like lifting weights,” he said. “You put on more weight and if you work hard, you’re able to lift it more easily the next time. Faith is a muscle; the more you use it the stronger it gets.” 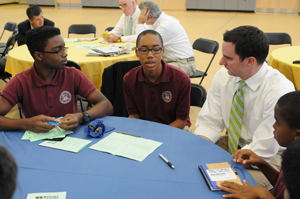 Other conferences held in Philadelphia included “Beyond Innovation” hosted by the Franklin Institute, “Sport and Sustainability” hosted by Green Sports Alliance at Lincoln Financial Field and “Safeguarding Children in Sport” hosted by UNICEF at the Wharton School at the University of Pennsylvania.

“We met so many wonderful people because we hosted this summit,” DelleMonache said. “Neumann couldn’t be more privileged to host this event and to give a forum for all these wonderful folks to speak about the amazing work they’re doing and to open the worlds of our students and faculty up in a new and different way. To give them this unique learning opportunity meant the world to us here at the institute.”

NEXT: Medical Mission Sister honored for work with victims of human trafficking