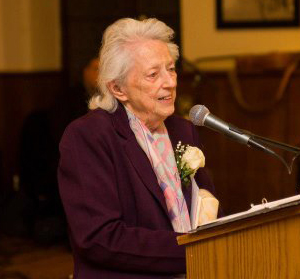 Medical Mission Sister Teresita Hinnegan has long worked to end to human trafficking and teach women how to value themselves. Recently she made history through her efforts.

She was awarded the first ever Dawn’s Place Life Time Achievement Award, recognizing her life’s work to empower women and stop violence against them, the Medical Mission Sisters announced Sept. 17.

Located in an undisclosed section of the city, Dawn’s Place provides trafficked women with sexual-trauma recovery therapy, access to addiction counseling and education and life-skills training. Since it opened in 2009, 26 women have taken part in the recovery program.

In May of this year, Sister Teresita became the first religious sister to offer the opening invocation at a session of the Pennsylvania House of Representatives. Usually reserved for an ordained member of the clergy, this honor was a special one that introduced Medical Mission Sisters — especially Sister Teresita and her work with trafficked and abused women — to a wider audience.

Sister Teresita also opened the Center for the Empowerment of Women in the Roxborough neighborhood of Philadelphia in 2007. Its mission of the center is, “To stop the silence and put an end to all violence against women and girls.”

A graduate of St. Hubert Catholic High School for Girls, Philadelphia, Sister Teresita is a nurse-midwife and former faculty member of the University of Pennsylvania’s School of Nursing. She has been a Medical Mission Sister for 52 years.

In 2009 she received an honorary degree of Doctor of Medical Science from Villanova University.

PREVIOUS: Conference at Neumann U shows sports as path to peace

NEXT: Official who issued same-sex marriage licenses removed as volunteer at Catholic school