In the shadow the cross, the sick gain prayers for healing 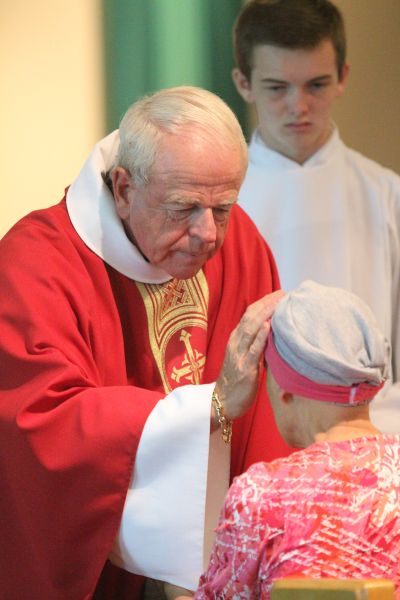 Father Joseph Dieckhaus, pastor of SS. Philip and James Parish in Exton, anoints a parishioner at a healing Mass he celebrated Sept. 14 at the church. (Photos by Sarah Webb)

Evangelist and song-leader George Bennard’s 1912 composition “The Old Rugged Cross” refers to the cross as the “emblem of suff’ring and shame.”

While the cross alone may be a sad symbol with the primary shame being our human shortcomings and sins, Catholic Christians gaze upon the crucifix with great affection, seeing the immeasurable love of the God who took human form to conquer those sins and win for us eternal life. That suffering and death, willingly entered into, makes the cross much more than an instrument of execution – it makes it the perfect symbol of our salvation.

As the universal church celebrated the feast of the Exaltation of the Holy Cross on Sept. 14, worshipers participated in a healing Mass at SS. Philip and James Church in Exton to unite their suffering to exaltation.

“Many people live their whole lives in the shadow of the cross,” said Father Joseph C. Dieckhaus, pastor of SS. Philip and James Parish. “As we connect Jesus’ death on the cross to the sacrament of the Eucharist, we already see hints of Easter, which is the ultimate victory over mortal suffering and death.”

Infirm parishioners and their families, as well as caregivers, received prayers and the sacrament of anointing of the sick, which included having their foreheads and hands anointed with oil.

While many who were anointed were elderly, some younger members of the parish also attended to receive prayers for their physical and spiritual frailties. Haydon Miller-Swatski, 11, who has Down Syndrome and is hearing impaired, was very excited and enthusiastic to be present.

“Father prayed for me and put oil on my hands,” he said. Haydon will have oral surgery soon and wanted to attend the Mass, according to Chris Swatski, his father.

“Haydon watches the daily Mass on EWTN every day and always desires to come to Mass in person as often as possible,” said Swatski.

Just as any Mass is one of thanksgiving (Eucharist being the Greek noun for thanksgiving), the communal celebration of the Eucharist also makes any Mass one of healing.

The relationship of prayer and healing dates back to the early Church, and in more recent history, is often associated with the Charismatic prayer movement. 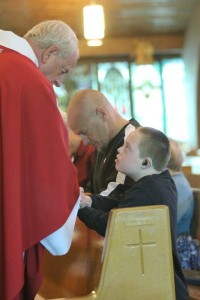 Haydon Miller-Swatski, 11, and his father Chris receive a blessing by Father Dieckhaus during the Mass.

Bonnie Lay, a member of SS. Philip and James Parish for the last five years, was one of the organizers for the healing Mass. She is involved with the Church Ministry Institute (a lay ministry formation program of the Archdiocese of Philadelphia), and was asked to pick a ministry on which to focus in the course of her studies. Having been involved in Masses of healing while living in the British Virgin Islands during the 1980s, she was very enthused to “exercise the gifts of the Charismatic movement in healing” here at SS. Philip and James.

“Father Dieckhaus was so very supportive of the endeavor,” she said. “I personally feel very strongly that healing, both in body and in spirit, ultimately leads to the confessional, and what better way to confirm the healing that has taken place?”

In that spirit, those parishioners who took part in the healing Mass celebrated on the feast of the Exaltation of the Holy Cross indeed united their suffering to Christ’s sacrifice in the hopes, as “The Old Rugged Cross” proclaims, of “exchanging their own cross for a crown.” 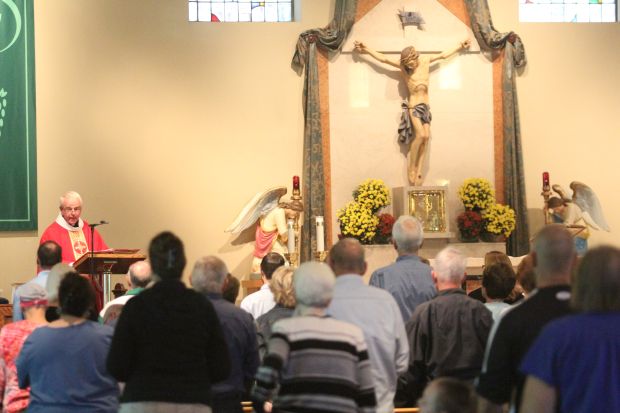 PREVIOUS: St. Aloysius School in Pottstown turns 100, keeps up with the times

NEXT: Archdiocese set for pilgrimage to Our Lady’s shrine in Washington