Archdiocese set for pilgrimage to Our Lady’s shrine in Washington 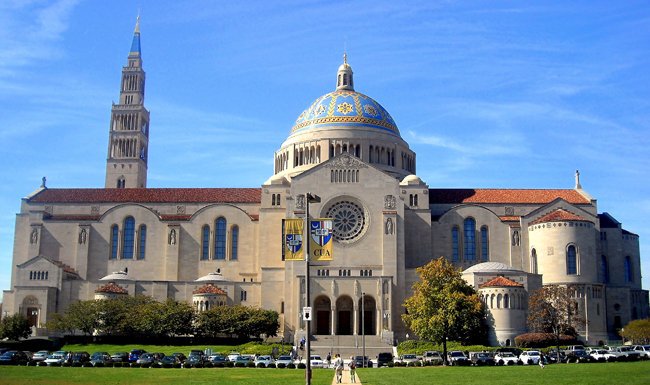 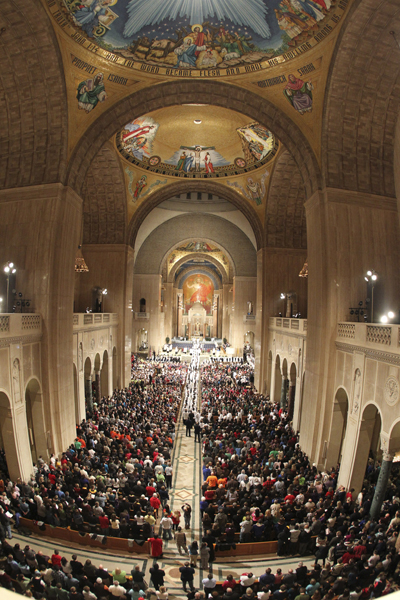 The interior of the great upper church at the Basilica Shrine of the Immaculate Conception in Washington, D.C. (CNS photo/Gregory L. Tracy, The Pilot)

Save the date — on Oct. 5 Catholics from parishes throughout the Archdiocese of Philadelphia along with seminarians from St. Charles Borromeo Seminary will board buses to Washington, D.C., for the biennial Philadelphia pilgrimage to the Basilica of the National Shrine of the Immaculate Conception.

This will continue a tradition that goes way back almost to the beginnings of what has become “America’s Church.”

This celebration in honor of Our Lady, which this year has been designated a “Year of Faith” event, will begin with an official greeting to the basilica, a penance service with an estimated 30 priests from the Archdiocese hearing confessions, a Procession and Crowning of the Blessed Virgin Mary and recitation of the rosary. It will conclude with a 3 p.m. Mass celebrated by Archbishop Charles Chaput, who will also be the homilist. All priests attending the pilgrimage are invited to concelebrate. The pilgrimage also provides ample time to tour the basilica and view the artwork that represents so many cultures.

“This pilgrimage happens during the concluding months of the Year of Faith and interest has been excellent,” said Father G. Dennis Gill, director of the Archdiocese of Philadelphia’s Office for Divine Worship. “But we are not interested in numbers. There are a lot of people who are Catholic or Christian but it is the heart that is most important.”

The theme for the pilgrimage, Father Gill said, is “Coming Together Under the Patronage of Our Lady, Star of the New Evangelization.”

It is an opportunity, he said, “for people to become personally more committed to living their Catholic faith and also being an example and inviting others.”

Located on the edge of the Catholic University of America campus, the Basilica of the National Shrine of the Immaculate Conception, the largest Catholic Church in America and easily one of the most beautiful, has a strong Philadelphia connection.

For one thing, it was mostly constructed by Philadelphia’s John McShain, the nation’s foremost builder in the mid-20th century. Originally intended to be a chapel for the Catholic University, it was first proposed by Catholic University Rector Msgr. (later Bishop) Thomas Shahan in 1911. Much of the work in bringing it to fruition fell upon his secretary, Father Bernard McKenna, a Philadelphian by birth who would become the shrine’s first official director in 1929.

Construction began in 1920. While much of the crypt level was completed in that decade, construction of the great upper church was delayed by the Great Depression and World War II, and was not dedicated until 1959. To this day embellishment continues, especially through the many side chapels dedicated to Our Lady under various titles and funded by Catholic ethnic groups.

Other Philadelphians who have played a prominent role for the National Shrine over the years include Cardinal Dennis Dougherty, chairman of the Building Committee; Msgr. William F. McDonough, shrine director from 1967-74; and Msgr. Michael Bransfield (now Bishop of Wheeling-Charleston, West Virginia) the director from 1980-2005.

Inquiries for participation in the pilgrimage should be directed to the archdiocesan Office for Divine Worship at 215-587-3537.

PREVIOUS: In the shadow the cross, the sick gain prayers for healing