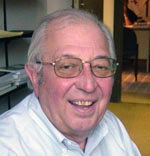 It has taken more than 20 years, (or more than 300 years, if you look at it that way), but La Salle University professor and St. Augustine scholar Frederick Van Fleteren is nearing completion of the first full translation to English of a 17th-century classic biography of Augustine of Hippo, “La Vie de Saint Augustin,” written by Louis Sebastian, le Nain de Tillemont (1637-1700).

Tillemont was one of the most prolific writers of ecclesiastical history in his day and is especially noted for his fidelity to accuracy. His work on St. Augustine is volume 13 of a 16-volume history of the Church during its first six centuries. His devotion of a full volume to St. Augustine is a tribute to the saint’s importance in the early Church, an importance that has continued down through the centuries.

Condensing Augustine to one volume was no easy task for Tillemont, because as Van Fleteren notes, St. Augustine wrote almost six million words that had to be considered.

“The project of translating this work, ‘La Vie de Saint Augustin,’ was necessary for the English-speaking, as well as other scholars of Augustine,” Van Fleteren said. “It is by far the most comprehensive and intensive biography of Augustine ever written. Modern French scholarship on St. Augustine goes back to him.”

Van Fleteren’s interest in Augustine was whetted when this great Doctor of the Church was the subject of his master’s thesis at Villanova University. That was followed by three years studying at the University of Ireland, University College of Dublin, under John O’Meara, who was then considered the greatest Augustine scholar in the English-speaking world.

At first Van Fleteren was one of four scholars who in 1991 mutually agreed to undertake the English translation of the 17th-century work, but death, illness and advanced age took its toll on the others and ultimately the work was left to him alone.

Part of the difficulty was fitting this important and time-consuming project into a very busy schedule and also in obtaining an available first edition copy of the 1,200-page biography and commentary penned by Tillemont.
Finally a copy was found at the University of Salzburg, Austria. This was photocopied and became the basis for Van Fleteren’s translation of the St. Augustine volume into English in three volumes of approximately 400 pages each. To call it a translation is an over-simplification, because Van Fleteren includes an introduction, commentary and annotations throughout.

Printed by Peter Lang Publishing, “The Life of St. Augustine; volume one, Childhood to Episcopal Consecration (354-396),” was released in 2010. Volume two, “The Donatist Controversy (396-411),” was released in 2012 and covers the years Augustine wrote in opposition to Donatism, a schismatic movement in Christian Africa.
The final volume, “The Pelagian Crisis (411-30),” covers Augustine’s writings against Pelagianism, a heresy that rejected the role of God’s grace in redemption, asserting instead man’s redemption came through his own free-will choices. This volume is set for release in 2014.

Why no one has previously undertaken the English translation of so important a biography is difficult to say. It may well be because Tillemont himself was somewhat controversial in spite of the recognition of his impeccable scholarship.

He was a member of the French aristocracy who came to the priesthood relatively late in life and for the last two decades of his life lived and wrote in seclusion at his family’s Tillemont estate.

He was also a Jansenist, a member of an austere reform movement in the Church based on the writing of 16th century Bishop Cornelius Jansen. Published after Jansen’s death, his writings among other things suggested a form of predestination — that only the previously selected receive the grace for salvation — and he based this in part on certain quotes from Augustine, made during his refutation of Pelagianism.

The Church maintains this is a misinterpretation of what Augustine said. This teaching was condemned by the popes on the grounds that all people could receive the grace for salvation, not just a pre-selected few.

Tillemont never accepted the condemnation of these teachings, which some sources suggest was the reason for his retirement, although Van Fleteren attributes his retreat to the family estate to his reclusive nature.

At any rate, Jansen himself had acknowledged papal supremacy, and directed that anything in his writings which the papacy believed was in error should be stricken from his text, something his publishers ignored after his death.

“It is a delicate question what Augustine thought, but I think Jansen held something different. He did not understand Augustine correctly,” Van Fleteren said.

Jansenism does have some effect on Tillemont’s commentary in volume three, but on the whole, in his own words, Van Fleteren notes, “he does not speak about theology, but the historical events as they took place.”