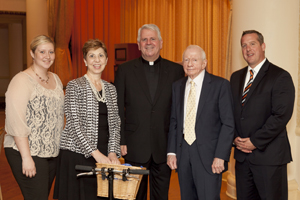 St. Katherine’s was one of 17 schools that submitted proposals on how the award would be applied at their school.

“This is a school ready to take its advancement effort to the next level,” said Christine Healey, foundation president, in presenting the award. “Its proposal was not only visionary and detailed just as any grant proposal should be, but it demonstrated a real understanding of the CSDP Methodology.”

St. Katherine School is one of six Catholic elementary schools in the Archdiocese of Philadelphia participating in the PACE pilot project (Partners Advancing Catholic Education), made possible through the Healey Education Foundation’s partnership with the Connelly Foundation.

“We are most grateful to the Healey Education Foundation for recognizing the wonderful work of St. Katherine of Siena School who has shown boldness and innovation with their CSDP initiative,” said Christopher Mominey, secretary for Catholic education. “This stands as another example of the excellent Catholic education that we are building upon here in the Archdiocese of Philadelphia.”

The school’s winning proposal highlighted its early achievements: enrollment growth of 11 percent in just one year; the successful opening of two pre-K classes in 2012-13; formation of a 21-member board of limited jurisdiction; contact initiated with more than 5,000 alumni and introduction of an annual fund.

The school also provided an action plan and budget for upgrading marketing materials, implementing data management systems and creating an advancement team to achieve its broader public relations goals and represent the mission of the school through “a level of professionalism once seen only in higher education institutions,” according to the award citation.

The award was presented at a Healey Education Foundation dinner Sept. 5 in Philadelphia, which was attended by 138 guests including diocesan representatives, pastors, school principals and advancement directors.

At the event, the foundation also announced winners of the SAGE grants for outstanding work in enrollment management and fundraising, and recipients of the Certified Methodology Expert (CME) credential.

The foundation provides consulting services through a staff of experts focused on helping schools help themselves. Best practices include an empowered laity through a policy-making board of limited jurisdiction and the hiring of a full-time advancement director.

The CSDP approach also creates a culture of philanthropy in which mission-based fundraising succeeds through well-run annual appeals and major gift programs. Since CSDP was established in 2004, nearly 60 elementary and high schools in three dioceses have adopted and practiced its approach to deliver better enrollment, stronger fundraising and more effective governance.

NEXT: St. Aloysius School in Pottstown turns 100, keeps up with the times