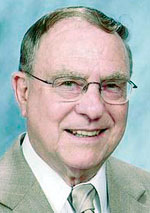 He was ordained May 25, 1986 at the Cathedral Basilica of SS. Peter and Paul by Cardinal John Krol.

“He was one of the finest men I have ever met if not the finest,” said Father Angelo Citino, pastor of Nativity. “He was dedicated to his ministry.”

When Deacon Gladnick was first ordained he served at Nativity, his home parish, but asked for a transfer to a parish where his ministry would be among the poor. He was assigned to Ascension of Our Lord Parish in the Kensington section of Philadelphia where he served for two decades until that parish closed last year. Father Citino persuaded him to return to ministry at Nativity, and his first words to the parish were, “I come here as a servant.”

“He truly saw himself in the role of a servant,” Father Citino said.

Born in Darby, the son of the late Joseph and Emma (Green) Gladnick, he was educated at Blessed Virgin Mary Parish, Darby, West Catholic High School, Temple University and Villanova University. He spent his professional career of 40 years at Hatboro-Horsham High School as a teacher, vice principal and administrator. He and his wife Dolores (Lori) raised six children and were active members of Nativity Parish.

Father John Eckert was newly ordained in 1972 and his first assignment was at Nativity. “The Gladnicks were the first family I met there. Leo and I became really good friends,” he said.

“He was principal at Hatboro-Horsham and running the CCD program at Nativity. After a few years I persuaded him to enter the deacon program because I knew he would be a wonderful deacon. When he went to Ascension he loved the people there. Whatever he did, Lori was always there in the background, quietly supporting him.”

“My parents were two hearts beating as one and they lived as one,” said Deacon Gladnick’s daughter, Terry Connolly. “My father was so gentle in his ways; we don’t remember him ever getting angry. He nurtured us and supported us without fail, and when we married he accepted our spouses as his own children. His grandchildren were important to him and he was important to them.”

Bishop Robert P. Maginnis is scheduled to celebrate Deacon Gladnick’s funeral Mass. Concelebrating will be Father Eckert and Father Citino, who will be the homilist. Deacon of the Mass will be Deacon Edward Konarski and deacon chaplains will be Deacons Clement McGovern and Robert Stewart.

Interment will be at St. John Neumann Cemetery, Chalfont.

NEXT: Deacon Davaro of St. Dorothy’s, Drexel Hill, dies at 87