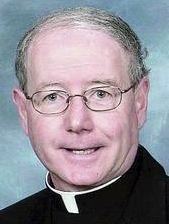 Born in Philadelphia, the only child of the late John Patrick and Mary Catherine (Mulvaney) Freeman, he attended St. Alice School, Upper Darby, and Msgr. Bonner High School before entering St. Charles Borromeo Seminary at age 17. He was ordained May 19, 1973 by Cardinal John Krol at the Cathedral of SS. Peter and Paul.

Father Freeman served as parochial vicar at Our Lady of Lourdes Parish, St. John the Baptist Parish and St. Timothy Parish, all in Philadelphia, and St. Andrew Parish, Newtown. He also served on the faculty of Bishop Shanahan High School and was Newman chaplain for Bryn Mawr, Haverford and Swarthmore Colleges. He also taught on the adjunct faculty of St. Charles Borromeo Seminary. He was appointed pastor of St. John Fisher Parish in 2004 and retired for reasons of health in 2011.

“He was an extremely spiritual man with such a good heart,” said Regina Robinson, office manager at St. John Fisher. “His homilies were wonderful; short and to the point and very heartfelt. He could communicate well with young people.”

In his personal life, Father Freeman loved eating out and traveling, Robinson recalls, and although he was fighting cancer for the last six years of his life, “he tried to do a little bit of everything until he had to retire,” she said.

“When we had our 40th anniversary of ordination, he wasn’t feeling well,” said Msgr. Edward Deliman, a St. Charles classmate. “There was no anger or ‘woe is me,’ he just accepted his illness as part of life and was happy to be with his brother priests.”

In his seminary days, “he was very studious, very bright, but a good mixer, he wasn’t an introvert,” Msgr. Deliman said. Later, “he was a very dedicated priest and his star really shone brightly when he was a Newman chaplain, and certainly he loved being a pastor.”

Susan Hart worked alongside Father Freeman for 10 of his 15 years in campus ministry, and remembers, “he had a great charism for interfaith work. He worked well with the Jewish and Muslim groups. He touched a lot of lives and did many weddings and baptisms; a lot of students kept in touch with him for years. He was very collegial and we worked together as a team. He was a good friend and a good priest.”

Father Freeman had no immediate survivors. Burial will be at Calvary Cemetery, West Conshohocken.