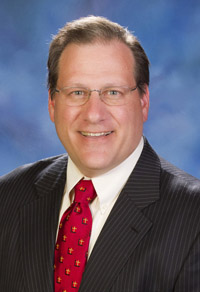 He was ordained at the Cathedral Basilica of SS. Peter and Paul by Bishop Daniel E. Thomas on June 2, 2012, one year ahead of his scheduled ordination date with special permission from Archbishop Charles Chaput because of his very grave diagnosed cancer. Bishop Thomas will also be celebrant and homilist at Deacon Santoleri’s scheduled Sept. 17 funeral Mass. Among the concelebrants will be Bishop W. Francis Malooley of Wilmington.

Deacon Santoleri was the husband of Carla (D’Ambrosio) Santoleri and the father of five children. Born in Bryn Mawr, the son of Adelaide (Rofi) Santoleri and the late Emidio Santoleri, he attended Our Lady of the Assumption School in Strafford, Archbishop Carroll High School and earned a Bachelor of Science degree in chemical engineering from Villanova University. He was employed for 33 years by E.I. DuPont, most recently as manager of global operations, until his retirement this year.

“I’ve known him through his family,” Bishop Thomas said. “His mother was in my parish at Our Lady of the Assumption, Strafford. He was a man of faith with tremendous energy, a Type A personality. He embodied diaconal ministry. He was not just ordained a deacon; a deacon is what he was. He drew tremendous strength from the fraternity of the men he was in formation with.”

Msgr. Gregory Parlante, who knew Deacon Santoleri both in his capacity as associate to the Vicar for Clergy for the archdiocesan Department of Permanent Deacons and as pastor of St. Cornelius, was unable to attend the funeral because of his own illness. But Bishop Thomas relayed a comment from Msgr. Parlante, who said, “permanent deacons are ordained into Christ the Servant; I believe Steve was ordained into Christ the Suffering Servant.”

“Steve was so grateful to the archbishop for letting him be ordained a year early,” said Deacon James T. Owens, director of the Office for Permanent Deacons. “He described the past year as the best year of his life; had he been ordained this year he would have been too ill to minister.”

With all of his busy work schedule and family life, Deacon Santoleri found time for many other mostly church-related activities, including board memberships with Generation Life and Amigos de Jesus, an orphanage in Honduras. He also worked with the Pro-Life Education Foundation in Philadelphia, the King’s Men organization in Lansdale, and Legatus in Wilmington. Deacon Santoleri was also a fourth degree Knight of Columbus.

Other concelebrants at his funeral Mass were Msgr. John P. Hopkins of the Wilmington Diocese and Fathers Michael J. Fitzpatrick and Dennis J. O’Donnell.

In addition to his mother and wife, Deacon Santoleri is survived by his children Matthew, Stephanie, Jeffery, Rich and Carl; also two brothers and one sister.