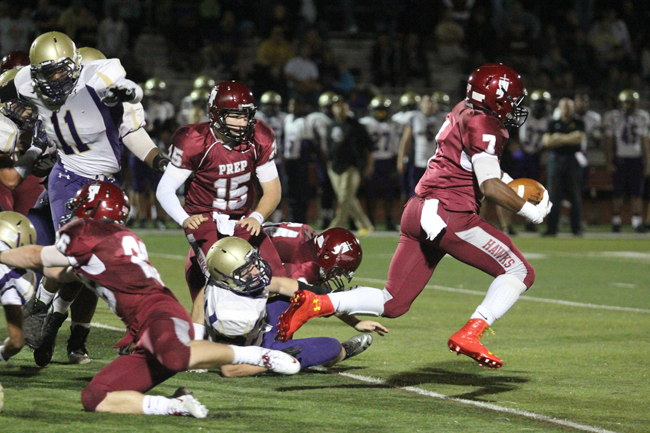 True to his name, freshman running back De'Andre Swift of St. Joseph's Prep squirts through a hole in the Roman Catholic line for some of his 145 all-purpose yards en route to the Prep's 42-7 win Saturday night at Plymouth-Whitemarsh High School. (Sarah Webb)

Not so long ago, Father Judge was just trying to win some football games on a consistent basis.

Now, the Crusaders can’t stand to allow a single point.

Heading into their contest against Bonner-Prendergast Saturday afternoon at Upper Darby High School, the Crusaders had not allowed a touchdown in three and a half games.

Three quarters later, the shutout streak had risen to 17. Holding a 21-0 lead on the strength of efficient passing by junior quarterback Zach Carroll and three touchdown runs by sophomore Yeedee Thaenrat, Judge had the ball deep inside Bonner-Prendergast territory as the final minutes ticked away.

Suddenly out of nowhere, an errant exchange on the snap resulted in a fumble and mad scramble. In came B-P senior John Durkin, who picked up the bouncing pigskin at the 22 and rumbled 78 yards for a touchdown.

“The Streak” was officially over.

“That was a long run,” said Durkin, one of B-P’s captains. “I just wanted to get there. I was pretty tired at the end.”

Durkin said he could feel a pursuer breathing down his back. So he cut back inside the 20 and rumbled the rest of the way home, causing a deafening silence from the Crusaders’ sideline.

“We knew about their streak,” Durkin said. “But at that point we still had a chance. It went through my mind about it coming to an end, but that wasn’t a really big deal.”

It was to Father Judge.

“It was a weird feeling to not have a shutout going,” said Judge senior Jim Galasso, a tight end and outside linebacker. “It didn’t feel like it was over because they still hadn’t scored on us on defense.”

That all changed when Bonner junior quarterback Collin DiGalbo lofted a gorgeous 48-yard touchdown pass to senior Kyle Dawson down the sideline with four seconds left.

As the Crusaders exited the field, they appeared in a rather subdued mood.

“I couldn’t believe how down (the players) got,” said first-year Judge coach Mike McKay. “It burst a bubble. I told them that I was proud of the streak and how they went about it; that it meant so much to them. We’re always trying to move a step forward, and that’s what is most important.”

Galasso, a member of St. Anne Parish in Philadelphia who has two younger sisters and six younger brothers, understood his coach’s point.

“We played better the week before, but we didn’t play nearly as good today,” Galasso said. “I’m not sure exactly what it was. It’s not that we played badly. It’s just that we didn’t improve, and that’s what we’re trying to do.”

In other Catholic League action:

Lansdale Catholic improved to 5-0 with a 36-13 win over Neumann-Goretti. Ryan Quigley (15 carries, 113 yards, two touchdowns) and Michael Isabella (9-62, two scores) did most of the damage for the Crusaders, who have now outscored their opposition by 171-26.

Next week Lansdale Catholic begins play in the Catholic League Class AAA Division. Their first opponent will be Bonner-Prendergast. That will be followed by a home contest against defending champion Archbishop Wood.

Against Cardinal O’Hara, Wood improved to 5-0 with a 41-0 Class AAA victory. An efficient running game saw four players eclipse the 40-yard mark. Quarterback Tom Garlick connected on 9 of 13 throws for 178 yards, with two of those completions going to Christian Lohin for 99 yards. Teammate Jarrett McClenton scored two rushing touchdowns and also returned an interception for a score.

In a Class AA Division tilt, Archbishop Carroll defeated Conwell-Egan, 48-26, as Austin Tilghman (16 for 150) and Anthony Hill (5 for 88) each scored twice. Sean McMorran fired a pair of touchdowns to Shawn Springs, who also scored on an interception return. For C-E, Andrew Linder gained 105 yards on 17 carries while Joe Ruggiero amassed 93 on 13 and scored twice.

In the Class AAAA Division, La Salle benefited from Kyle Shurmur (15 of 25 for 167 yards and two touchdowns), Jimmy Herron (6 catches for 85 yards and two scores) and Nick Rinella (17 carries for 82 yards and a touchdown) to stop Archbishop Ryan, 28-14. For the Raiders, Connor Golden enjoyed a career day with five catches for 141 yards and both Ryan touchdowns.

(See our photo gallery from the game.)

NEXT: Players say concussions a concern, but joy of game outweighs risk