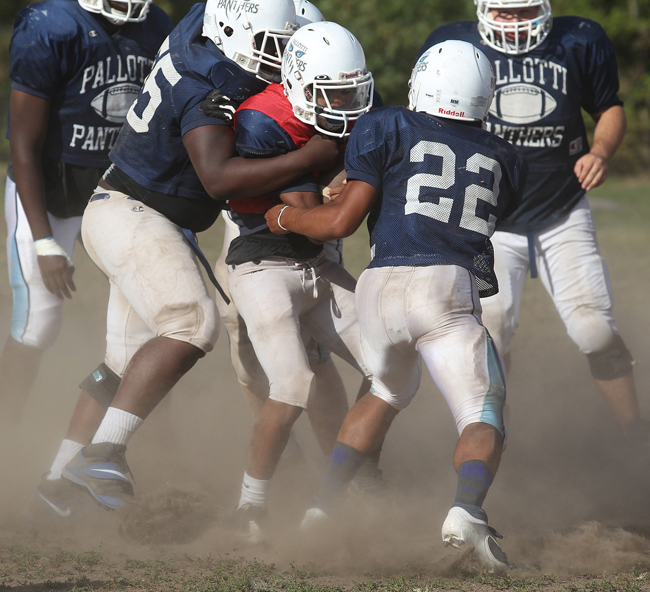 Players converge on the quarterback during football practice at St. Vincent Pallotti High School in Laurel, Md., Sept. 26. Because of the increase in the number of sports-related concussions, 49 states except Mississippi have passed the Lystedt Law to educate parents, coaches and athletic trainers about the symptoms of a concussion. (CNS photo /Bob Roller) 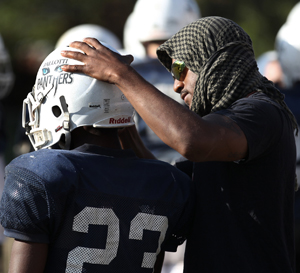 LAUREL, Md. (CNS) — St. Vincent Pallotti High School senior Rudolfo Garcia said, despite having two concussions back-to-back, he never thinks about the possibility of becoming injured before stepping out on the football field to play.

Because of the increase in the number of sports-related concussions, 49 states — all but Mississippi — have passed the Lystedt Law to educate parents, coaches and athletic trainers about the symptoms of a concussion as well as to keep players suspected of having a concussion from returning to their game or practice the same day.

Many high schools, such as St. Vincent Pallotti in Laurel, also have a certified athletic trainer on staff to care for athletes.

Courtney Courtemanche, head athletic trainer at the Catholic high school in the Washington Archdiocese, said she has seen the most concussions among soccer players and football players.

Garcia, who plays tight end, defensive end and outside linebacker for St. Vincent Pallotti, said Courtemanche evaluated him after he suffered his first football-related concussion during a tackling drill sophomore year.

“Everything felt different and looked different,” he told Catholic News Service in an interview. “It’s hard to understand.”

Garcia said he was able to return to the field after two weeks.

Garcia suffered a second concussion shortly after he returned. He said Courtemanche referred him to the Kennedy Krieger Institute of Baltimore for treatment.

As St. Vincent Pallotti’s head athletic trainer, Courtemanche oversees the health care of all of the school’s athletes on 27 sports teams. She said she evaluates every player who is suspected of having a concussion.

“Symptoms include headaches, nausea, vision issues and ringing in the ears,” Courtemanche said.

Two weeks is the minimum amount of recovery time for an athlete who has suffered a concussion, she explained, and anyone who suffers a concussion during a game or practice cannot return that day.

“They (athletes) are placed on cognitive rest,” Courtemanche said. “Eighty percent of concussions will resolve within three weeks.”

Athletes must also follow the protocols she gives them, Courtemanche said. Cognitive rest after a concussion is a recovery process that includes time away from one’s television, computer and cellphone, she noted.

“The biggest thing is lots and lots of sleep,” she said.

Courtemanche said she often asks athletes to count when they are suspected of having a concussion. She said a less obvious, yet major indicator of a concussion is when one’s personality changes after sustaining a hit.

“I really get to know the kids being here full time,” she said. “I can pick up on personality changes.”

Courtemanche said she also enjoys being around student athletes. “It’s fun being on the sidelines. The kids keep you on your toes.”

She also appreciates the order and sense of respect she said is shared by the students and faculty at St. Vincent Pallotti.

“I love working in a Catholic school,” Courtemanche said.

“I wasn’t right for a good three weeks (after my concussion),” Jernigan said.

James, a wide receiver and punter who has suffered five concussions, said players are taught to tackle with their head up to avoid hurting themselves and other players.

“Not a lot of people follow that,” he said. “They try to get the guy to the ground the easiest way.”

Jernigan, a running back and linebacker for St. Vincent Pallotti, said he recently suffered a pectoral injury during an inside running drill at practice. Out for four days, he said he iced his injury frequently and was treated by Courtemanche and his own physician.

Jernigan said he hopes to continue playing football in college.

“It’s a very dangerous sport,” he said. “But, I love the game of football. I love what it brings.”

Garcia, who began playing as a high school freshman, said he values the brotherhood his football team has given him.

“I’ve made some of my best friends playing football,” he said. “I would love to continue playing in college.”