In times of trouble, pope says, call on the communion of saints 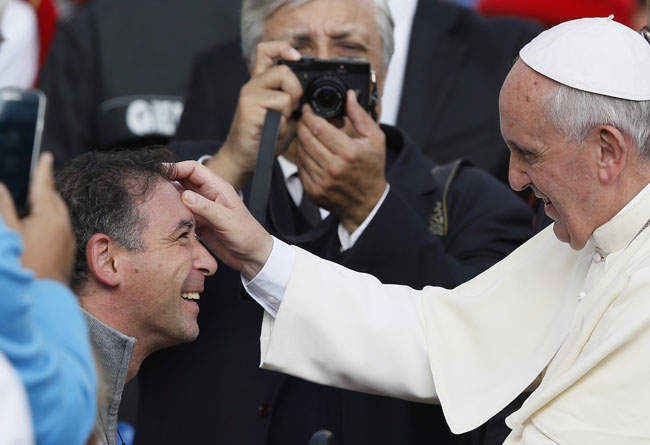 Pope Francis greets a man during his general audience in St. Peter's Square at the Vatican Oct. 30. (CNS photo/Paul Haring)

VATICAN CITY (CNS) — Trials and doubts are part of everyone’s faith journey, “even mine,” Pope Francis said, but Christians know they can get through the hard times with help from God, other Christians and those in heaven.

“Who hasn’t experienced insecurities, losses and even doubts in the journey of faith?” the pope asked. “It’s part of life. It should not shock us because we are human beings, marked by fragility and limits.”

“Don’t be frightened,” but ask for help, Pope Francis said Oct. 30 at his weekly general audience, talking about the “communion of saints” as the church prepared to celebrate the Nov. 1-2 feasts of All Saints and All Souls.

In times of difficulty, the pope said, “it is necessary to trust in God through prayer and, at the same time, it’s important to find the courage and humility to open yourself to others in order to ask for help.”

“We are a great big family” through baptism, the pope told the estimated 50,000 pilgrims and visitors gathered for the audience in St. Peter’s Square. The communion of saints, he explained, refers not only to those who have been canonized by the Catholic Church but to all the baptized.

“The communion of saints goes beyond earthly life,” the pope said. “It extends beyond death and lasts forever,” to find its fullest expression when all believers are “reunited in heaven.”

“All the baptized here on earth, the souls in purgatory and the blessed souls in heaven form one big family,” he added in remarks to Polish pilgrims. “This communion between heaven and earth is expressed particularly in prayers of intercession, which are the greatest form of solidarity, and is also the basis of the liturgical celebrations of the feasts of All Saints and All Souls.”

Every Christian, the pope said, has an obligation to be a responsible part of the communion of saints, supporting other Christians in their faith.

A believer’s communion with God and with Jesus must find expression in communion with all those who also believe, he said. Those who truly enter “the glowing furnace of the love” of God, love others because God’s love “burns away our selfishness, our prejudices, our internal and external divisions,” he said. “The love of God also burns away our sins.”

Immediately after the audience, Pope Francis met leaders of Iraq’s Christian, Kurdish Yazidi, Sunni and Shiite Muslim communities. He had asked pilgrims at the audience to pray for Iraq, which “unfortunately is struck daily by tragic episodes of violence,” and needs “to find the path to reconciliation, peace, unity and stability.”

PREVIOUS: Pope says hope is not mere optimism but a link to eternal life

NEXT: How many times a day can one receive Communion?