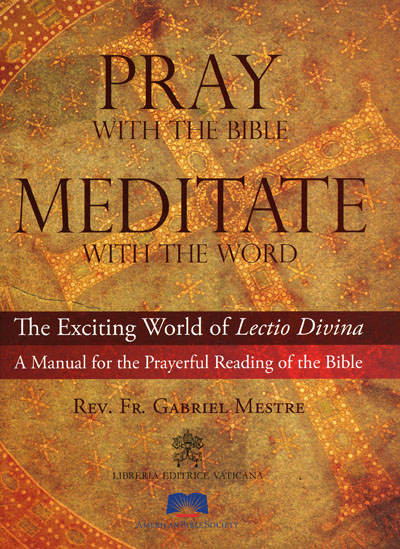 This is the cover of “Pray With the Bible, Meditate With the Word,” published by the Vatican publishing house, the American Bible Society and the vicar general of the Diocese of Mar del Plata, Argentina. The book is a step-by-step manual to help Catholics read, pray and meditate on the word of God. (CNS photo)

VATICAN CITY (CNS) — The Vatican publishing house, the American Bible Society and the vicar general of the Diocese of Mar del Plata, Argentina, have teamed up to develop a step-by-step manual in the Catholic art of praying and meditating with the Bible.

“Part of the aim of the project is to get Catholics to read the Bible and the other is to get them to rediscover ‘lectio divina,'” the traditional Catholic method of reading, meditating on and praying with the Bible, said Mario Paredes, who runs Catholic programs for the American Bible Society.

The manual, in Spanish and English, will be available for purchase through the American Bible Society’s website, www.bibles.com.

Presenting the manual, “Pray With the Bible, Meditate With the Word,” at the Vatican Oct. 30, Father Gabriel Mestre, the author and Mar del Plata vicar general, said Pope Francis’ morning Mass homilies “are the result of ‘lectio divina.'” He said the homilies offer a glimpse into the pope’s process of reading the text, meditating on it, praying with it and reflecting on what it is calling him and other Christians to do.

Jesuit Father Stephen Pisano, vice rector of the Pontifical Biblical Institute, who spoke at the Vatican presentation of the manual, told Catholic News Service that “lectio divina” and the approach to the Scriptures Pope Francis learned as a Jesuit have many similarities; both, he said, involve “taking the Bible text for study, reflection and prayer, which leads to discernment.”

Brother Ricardo Grzona, president of the Ramon Pane Foundation and a consultant to the American Bible Society, told the Vatican audience that in most of the developed world, “the Bible has pretty much arrived everywhere.”

“It’s hard to find a home without one,” he said. “But most people don’t read it, and don’t know how to pray with it and apply it to their lives.”

PREVIOUS: What makes a saint? For starters, longing to see God’s face